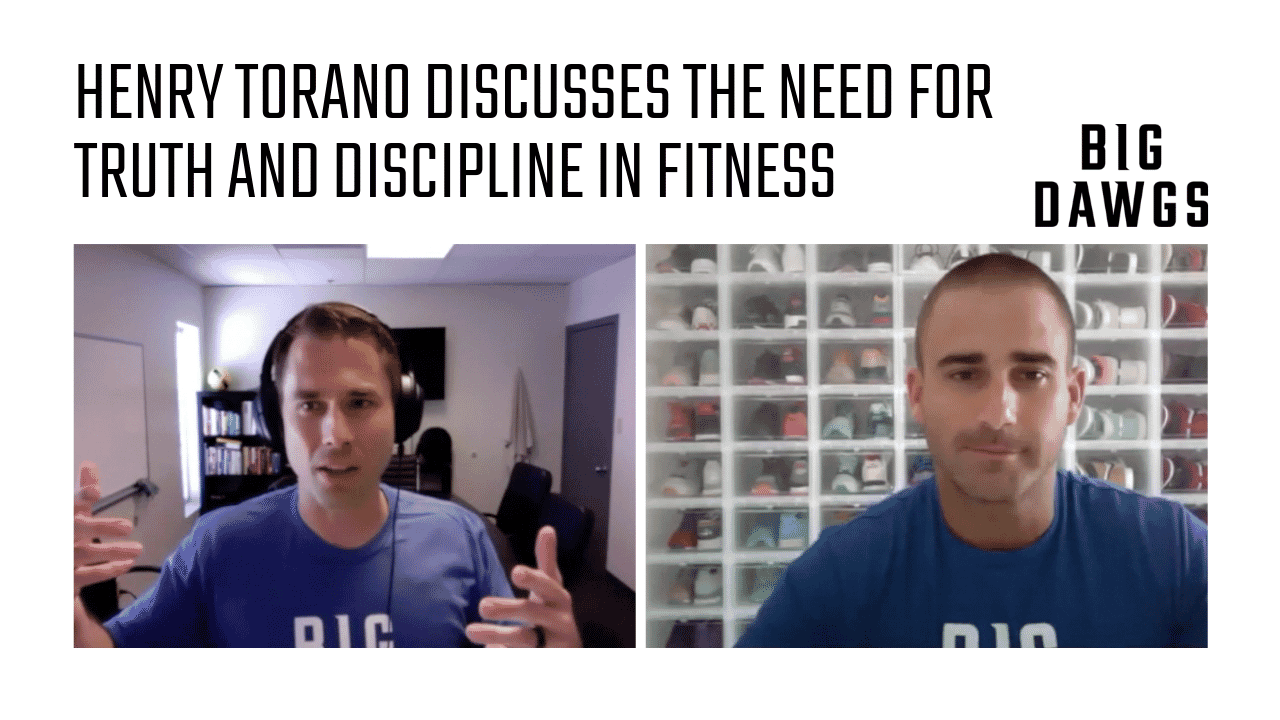 Henry Torano is a guy who tells you like it is. It’s in his blood. Listen to him for more than 30 seconds and you’ll immediately understand that he will shoot you straight, and it is highly refreshing when we are constantly bombarded by fakeness and people blowing smoke to clients and to the public.

I opened the conversation by asking Henry how he came to be that kind of coach or person who speaks the truth above all else. Henry’s response was short and sweet

It’s who I am and who I’ve always been

Something that you immediately hear from Henry is just how much fitness, strength, and discipline mean to Henry. He has had an internal fire in his belly for as long as he can remember. That physical preparedness made him feel ready to compete on the field and in the world.

Henry continued both his fitness and athletic career for a long time after he began to feel this need for strength and discipline. He played Division 1 football in the United States followed by semi-pro football in his home of Puerto Rico. After that phase of his athletic career, he moved into cyclical sports such as cycling and triathlon, and then he got into CrossFit, so naturally he became disciplined and competitive in that sport.

When I asked Henry how he uniquely helps his clients and athletes, he responded that he relates to them very well. Henry is the type of guy who wants to experience things. Henry is a doer. Because Henry has gone through most everything there is to go through in fitness - as an athlete, a coach, and a fitness enthusiast - he is extremely understanding of what his athletes are going through day by day. That connection and understanding builds great trust with his athletes because they know he’s speaking from truth and experience.

What Did Henry Learn From Sports That Helped Him In CrossFit?

Henry discusses plainly that football was his sport. He describes football as sacred to him. The way he clarifies why it’s sacred is because it’s challenging; it requires strength and discipline which resonated - and still resonates - so deeply with Henry. Because of how much discipline Henry got from football, he sees that as a big carryover to his time as a CrossFit athlete and coach.

Henry can’t live with himself if he doesn’t give it everything that he’s got on the “field.”

It was during our discussion about how sport carried over to CrossFit that Henry went down the rabbit hole of effort. Listen to this part of the video (it’s about 6:20 in). Henry is passionate about his own effort. You won’t hear him comparing himself to others. You’ll only hear him asking himself the question “Did you leave it all out there?” A successful day is one where he walked off the field knowing in his heart that he did everything he could for himself and his team.

The feeling of disappointment would be overwhelming to him, and it still plays a big role in his daily life to this day. Henry is uniquely capable of helping his athletes become aware of whether or not they gave it their all because he sees that as critically important to any athlete’s success and long-term fitness journey.

Henry helps his athletes get over the fear of going for it, and he helps them align their goals to their actions and mindset along the way to give them the best chance of success. Henry plainly says “When you know, you know” which translates to his athletes knowing when they are putting in everything they can to achieve their goal. If they are, brilliant, they should stay the course. However, if they are not putting enough in, Henry helps them see it, see why, re-align their goals - or possibly just remember them - and then move forward stronger than before.

Henry took a real second to think about this; I think that may be because Henry will always be both an athlete and a coach at heart. As he came to his answer, though, he nailed it!

As an athlete, you have to be more selfish about everything surrounding your goal(s), but as a coach I/we have to step out of that selfishness and put our focus on the people we’re coaching and how we’re making them better.

Henry had to recognize that there was a real transition time to his transition from an athlete to a coach. He felt it coming, and although he may have tried to fight it a bit, he knew that to thrive as a coach - ie to help his athletes the most - he had to come to terms with it and move forward. Going back to Henry’s disciplined mind, when he made that true decision to be a professional coach, he knew his transition was there. It wasn’t an easy transition.

From here, we took a quick aside because my curious nature just couldn’t avoid asking Henry about his shoe collection behind him. Little did I know I would be bringing up a tough thought for Henry. Henry is a big shoe - sneakers in his words - guy. He’s been collecting for a long time, but he and his family just bought a new home which reduced his shoe space so he had to put a number of his shoes into storage and even get rid of some of them. I think it’ll take him a minute to get used to that idea, but in true Henry fashion he made the call decisively and went for it!

What Are You The Most Interested In Exploring In Fitness Right Now?

Henry loves the concept of athletes in their transition stages. He loves to dig in with his athletes when they ask him the question “how do you maintain your motivation?” Henry has been digging into this question in a big way because he never feels unmotivated about fitness. We talked for a moment about the beautiful conversations that he has with his clients as they are in their transitionary times of their lives and how Henry helps them find the “fitness is breakfast” mindset where they love the idea of training for training, not just for outcomes or wins. Man, what a powerful transition that is and or will be for all athletes at some point in their career!