I had a really fun conversation with Brian Foley. We discussed some of the biggest things he picked up, learned, and we also spoke about the surprising moments from the 2019 CrossFit Games “Main Event.” And, he did it while in a camo tank top which was even better!

"What were some of the great moments that you saw in the CrossFit Games this year?"

Brian talked a lot about how Tia (Clair Toomey) and Mat (Fraser) always appeared in and under control on the field and in the arena. Sure, they probably “should” be in control, but Mat especially faced a tough challenge from both Noah Olsen and BK Gudmondsson. Brian discussed his interest in watching Fraser and Olsen go head to head in the final event of the weekend, “The Standard.”

Reminder on What “The Standard” CrossFit Games Workout Was:

Brian and I talked about how Fraser made the decision to go even bigger because he knew it was all on the line. He was willing to fully “send it” and that showed through in both the first muscle up set - he went 10 unbroken (in a row), but the 10th rep was tough for him - and then when he caught Noah was when he did 5 touch and go (unbroken - in a row) power snatches. Fraser’s ability and willingness to put it on the line mixed with his absurd talent and capacity lol, allowed him to eek out Olsen and win his 4th CrossFit Games in a row. That really was a cool moment.

Brian went into a really interesting thought next. He mentioned how he hasn’t seen Noah “go for blood” like Fraser goes for blood. That thought lead Brian into the idea of learning from the top athletes as they strive for higher and higher heights. Even Fraser made mistakes throughout the weekend, so he has a room to get better, even if it’s not too much room.

"What were some of the mistakes you saw from athletes in this year’s Games?"

Brian mentioned Katrin (Davidsdottir) going for too big of a set in the same event, The Standard. She did 1 too many reps and it burned her out, and whereas Mat Fraser could recover, Katrin couldn’t in that moment. Brian went on to explain that he loves when athletes go for it, but particularly on the front end (early in the exercise reps) athletes should have enough experience to know when it may be too much. It’s a constant battle of choosing the moments to put the pedal down vs hold back.

Brian discussed how athletes can improve over the course of the entire off-season. They can learn from every moment in a big competition such as the Games, and they can then design - in our opinion the coach designs this - their entire training regiment to systematically put the right amount of volume and intensity in to progress their training to an even “higher” amount than they’d face in a competition. As athletes “organize” their training to exceed the requirements they’ll face on the field, they will know exactly what they are capable in all sorts of situations that they’ll likely face when they go to battle next time.

"What surprised or confused you about the CrossFit Games or Athletes this year?"

Brian talked about the Games cutting athletes very quickly. He wanted to watch more big name athletes, such as Brent Fikowski, compete for a longer period of time throughout the weekend.

We finished by discussing why or how we could/should ever be surprised with new, strange, confusing things show up at the Games. Frankly, we didn’t make it too far past “it wouldn’t be as interesting or fun if it was the exact same thing, so if we compete or coach people in the sport of CrossFit, we need to open our minds to most anything being possible….because it probably is! 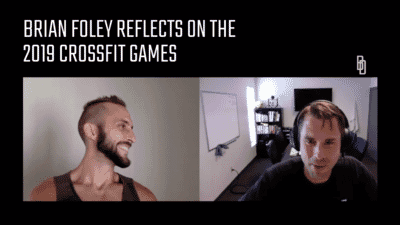