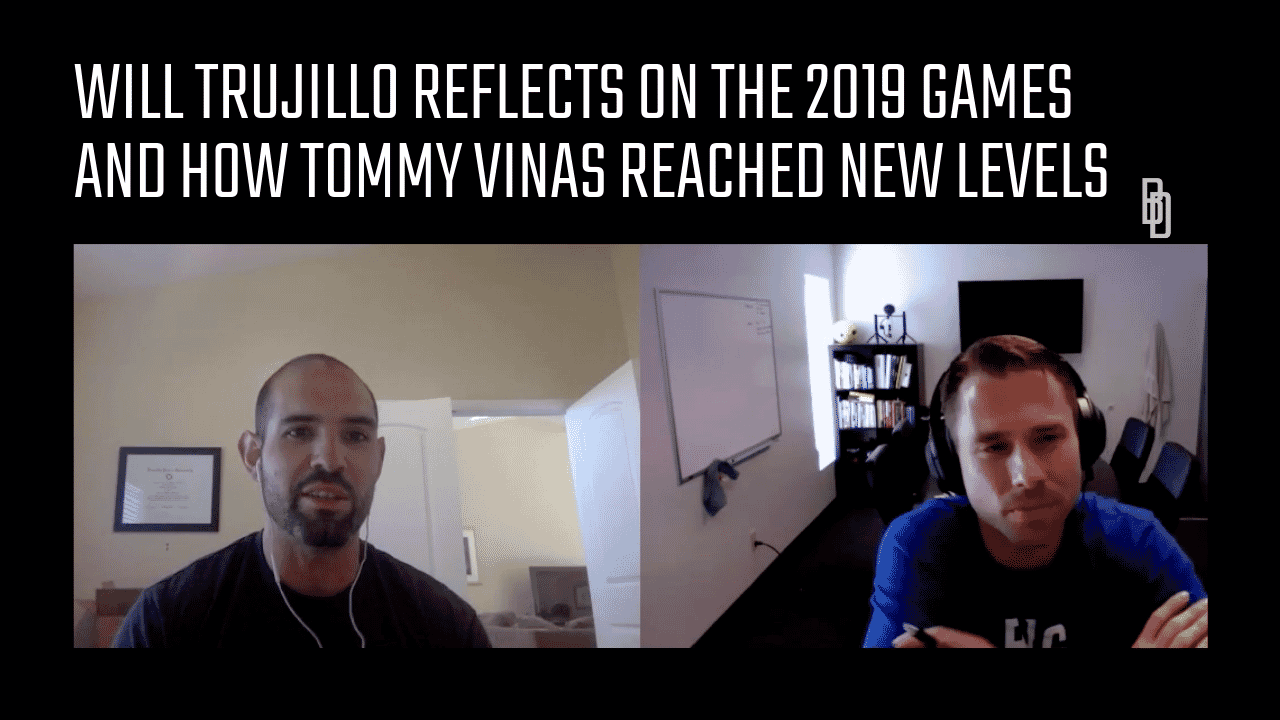 Will Trujillo Talks Tommy V, Invictus, And The 2019 CrossFit Games

Will Trujillo Talks Tommy V, Invictus, And The 2019 CrossFit Games

“For so long, Tommy was the best athlete in the pond even as the pond got bigger, but then the pond finally punched back” - Will Trujillo

I spoke to Big Dawgs Coach, Will Trujllo, and we spoke about how one of his athletes, Tommy Vinas - Tommy V - finished 3rd with Team Invictus. What Will was so happy about is how Tommy stepped up, lead, and RACED the whole weekend...

What Did Will Learn From The 2019 CrossFit Games Generally?

Will didn’t need to think long about this answer. He said “We all have to learn to deal with changes and confusion. No matter who you are or how good you are at CrossFit, when you make it to the Games you just have to expect things will change. Each year coaches and athletes must take cues from the previous year as to what the baseline of the competition will look like because it informs how you’ll setup an entire season of training. However, you have to expect that there will be some forks in the road, so you have to plan and prepare for those forks.

Will said the shift is more of a mental shift as his athletes go through a season. They need to expect these changes so that they have a lower stress level when those forks do hit.

What Did Will See In Tommy V and Invictus Throughout The Games?

The first piece Will discussed was how resilient Invictus was mentally. Particularly this year, the talent pool at the Games for teams is immense. Teams will have great, neutral, and poor events because every event will be brutally competitive. Invictus showed great resilience throughout the weekend.

Will discussed how Tommy has emerged greatly this year - through years of work - as mentally tough and as a leader. Whereas in years past, Tommy would “maximize damage” in that if he was behind in any way, he’d stop racing and take a poor placement in the workout. This year, Tommy was always the first person ready to go whereas in years past he would have walked or slumped his shoulders. He just kept fighting.

Will noticed that this year was a massive step in the right direction for Tommy.

What Are Some Of The Biggest Changes Tommy Has Made To Improve In This Way?

Will thought about this answer for a moment. He answered with “Tommy had to learn just how much he wanted it. Tommy was so used to being the best in the gym, competition, state, etc. It didn’t seem to matter that the pond of competition was growing from local to national to international. But, at the 2018 Individual Regionals, Tommy didn’t make the games - The pond punched back - Tommy recognized that that was a moment he needed to learn from because he wanted to win.

It when Tommy knew in his gut that his mental game needed to improve that these changes and upgrades happened. Tommy couldn’t just be told it, he needed to feel it. That was a big turning point (for a guy who had already made the Games as an individual!).

We talked about how these choices needed to be made every day in training...

How Did Tommy Make Those Daily Choices That Helped Him Get Here?

Will worked with Tommy to recognize that Tommy would be better than 99% of the people he would train consistently with, at any level - btw that’s how gnarly of an athlete Tommy is, physically.

Remember that Will was a multi-year individual Regionals Athlete. Will used to beat Tommy as did others around him. Tommy got better and better as he got beat by people. It was when Tommy beat all of them that his landscape, mentally, had to shift. He needed to learn that he needed to make the choice to “win” every day in training no matter who was with him, what music played, if his coach was there, etc… That choice was made over and over this year. And it showed up when it counted!

Will mentioned that he just spoke to Tommy and that they were still designing the whole season. Part of what they will work on initially, though, is to “take the car apart” and fix the pieces. They are going to build the aerobic engine while doing a lot of structural work - all after an deload from the Games - so that Tommy’s body is rock solid for the long-run. At 23 years old, Tommy is still physically improving, but that doesn’t mean he doesn’t need to solidify his body.

Another piece they will work on this year is to begin to move into the leadership role as an athlete. Even this year, he was maybe more of a support athlete on Invictus because they’d trained together for years. Moving forward, it’s most likely that Tommy would be the “go to” male on a team, if he goes team, so they are going to work hard to prepare Tommy to truly lead on and off of the field, and in and out of the gym.

Will continued to say...when Tommy is ready to fight, nobody out there beats him physically. We touched on a few numbers that Tommy routinely does:

When you factor in all of these areas and then you add mental strength to it, it’s going to be an epic year!

We hope you enjoyed. Ask us any questions you have!