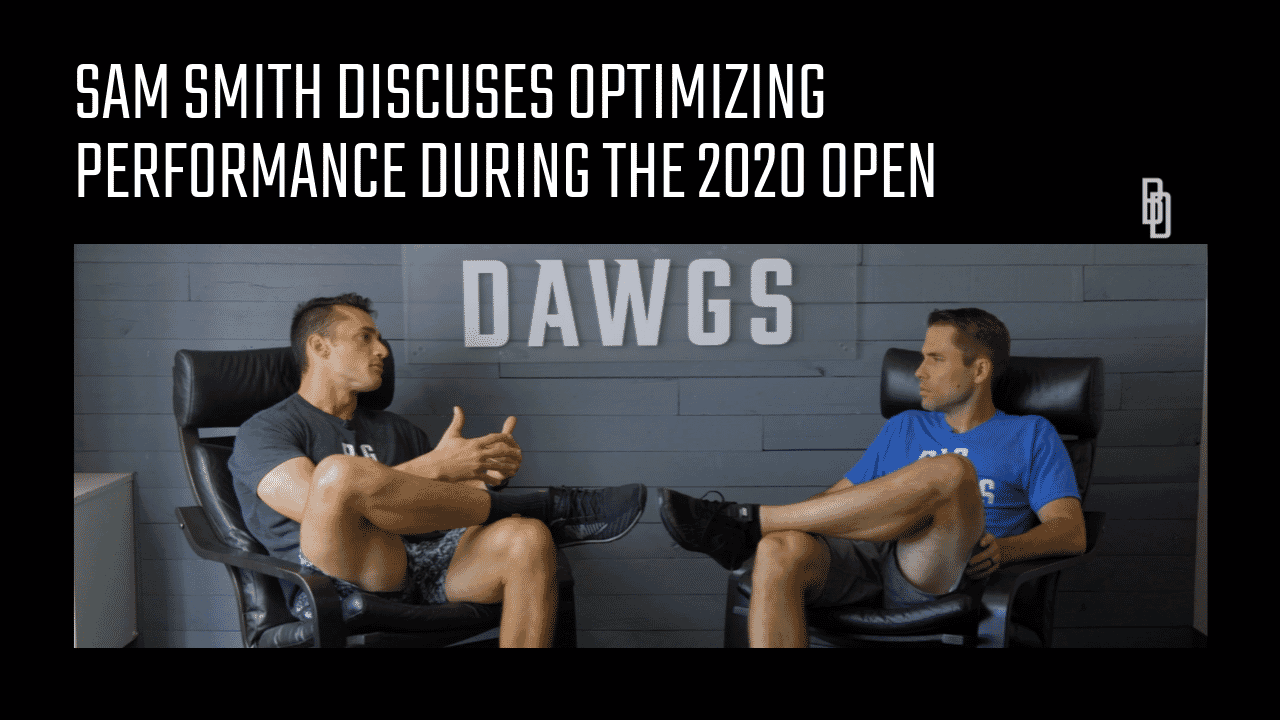 We have been discussing the CrossFit Open with everybody inside of Big Dawgs, so I decided to ask coach Sam Smith to help me better understand how athletes can view the Open for themselves to get their best performance inside of it. Something important to note, though, is that this isn’t an article about how to train for a year - or 5 years - to peak physically for it. No, this article and video are about how to take wherever you sit, right now, and put your best result forward. I hope you enjoy!

Note - if you want to get a quick vignette from Sam about how to build an athlete over 1 year (which isn’t enough haha) to be best prepared to peak during the Open, check out this article - How To Improve Open Movements Over The Course Of A Year

The CrossFit Open is a CrossFit competition that occurs once per year - in 2019 it happened twice in order to change the schedule moving forward. The competition is a 5-week endeavour where a new workout is released each week. People have to complete the workout and post their scores online; they may perform the workout as many times in 4-5 day period as they’d like, so they’ll post their top score.

CrossFit then takes the top performers and qualifies them into the CrossFit Games in Madison, Wisconsin, but there are numerous other CrossFit Sanctional events that are using people’s Open placements as qualifiers into their live events.

How do you view the CrossFit Open workouts in terms of the types of workouts that generally face the athletes?

There are outliers here and there, but when you look across the top scores in the CrossFit Open, which are often a different group of people than who won CrossFit Regionals/Sanctionals or the CrossFit Games, you always see athletes who are able to do a lot of work at submaximal weights.

What are some of the biggest things you think about for your athletes leading into the CrossFit Open?

Sam initially brought up that there is additional stress around the CrossFit Open because of human nature. The points that Sam mentioned around stress were:

Simply knowing that those emotions are likely present inside of you and/or other athletes will help begin to dissipate those negative emotions that will hold you back during the 5 week competition. Awareness is always the first step.

Do you feel differently having the CrossFit Open twice in one year?

We taped this interview in October of 2019, right before the second occurrence of the CrossFit Open in 2019. So, Sam’s responses were “in the moment” thoughts, that’s why we wanted to get them.

Sam mentioned that a lot of athletes put a lot of effort into the March, 2019 CrossFit Open, so having to do it again this year is a shake up of their rhythm within the year. It’s important to remember that we are rhythmic creatures, so when we completely change that rhythm it takes a little while to be fully used to it. And, what happens when we change anything in our lives?  A stress response.

When you have the time to prepare and peak over a 1-year cycle of training, your body gets used to “being ready” in the February/March time frame, if you’ve done the CrossFit Open in the past. There haven’t traditionally been major competitions in this time frame, so athletes will be feeling a bit of added stress this year.

If you couple the change in rhythm with the 2nd competition “peak” in a year, that’s 10 weeks of competition season (let’s not even include those athletes who went to the Games and essentially competed throughout the Summer) between March and October. It’s a lot, so you need to recognize that.

How do you view the CrossFit Open workouts to best prepare your athletes for them?

Sam elegantly broke the types of athletes into 4 buckets to better have this conversation because each bucket has a very different set of stresses due to the outcomes they intend to achieve in the Open:

This athlete group is also skilled and quasi-prepared already because they likely have done the CrossFit Open in the past. Sam is making sure that he has their work capacity (ability to do a lot of work within a time constraint) maximized as well.

During the CrossFit Open competition time period, Sam focuses a lot on confidence and health. Because of the added stress, you’d be amazed at how many athletes get sick during the Open. Sam works hard on his athlete’s mental prep each week. He gauges how much a certain workout took out of his athletes (even though this group likely has enough volume and intensity built over the years to both express and recover from multiple hits of each Open workout.

Something really interesting to think about is an athlete who is making a big attempt to make Sanctionals but who doesn’t have enough volume built (over years).  Sam manages each week during the Open because it is very likely that that athlete can NOT repeat every workout and maximally perform for 5 weeks. It’s simply too much stress on their system.

This group of athletes is very similar to the above group going to Sanctionals; they’re just better. Their training will lead them into ensuring that they can maximally express each Open workout - be it one attempt or multiple - recover from them, and then go again and again for 5 weeks.

The stress level on these athletes can be quite high because of the ramifications of if they do not qualify directly out of the Open. If they don’t qualify, they will then have to take their “show on the road” and qualify through a live Sanctional. And, while that can be fun and potentially profitable, it adds stress to not have already punched your ticket to the Games.

Because of this, Sam mainly focuses on peaking his athlete’s confidence prior to and then each week during the Open because they are already elite at movements + work capacity.

We need to further break these athletes into 2 buckets to show a better picture:

Sam makes sure that he tweaks parts of their training in order to get them prepared for the Open workouts not only to prepare them physically, but also to prepare them mentally. There is a level of stress around how athletes place out of the Open, so Sam wants his athletes to go in confident even though Sam will still be working on additional aspects of their training throughout the 5 weeks of the CrossFit Open.

These athletes need to have been setting up this build and peak since around the June timeframe. Sam sets up their training to help them express all 5 Open workouts very effectively and also recover from them.

These athlete’s training needed to help them understand what to expect mentally and physically leading into the Open, but during the Open they need to intricately decide which workouts to repeat, on what days to repeat them, and the exact way they’ll move through each of the workouts to optimize their performance.

These athletes will continue to work on their fitness. Sam will have them progressing skills, strength, or energy system work during the CrossFit Open even though one of their weekly workouts will be to do the Open workout of the week. The reason Sam wants to do this is because these athlete’s intent during the Open is not to maximize their placement, so Sam can positively stress other aspects of their fitness throughout the 5 weeks in order to realize progress that would otherwise be forgotten if they put full effort/focus into each CrossFit Open workout.

What should ALL athletes do to get the most out of each of the 5 CrossFit Open Workouts?

Best of luck to everybody. Let us know how you do!