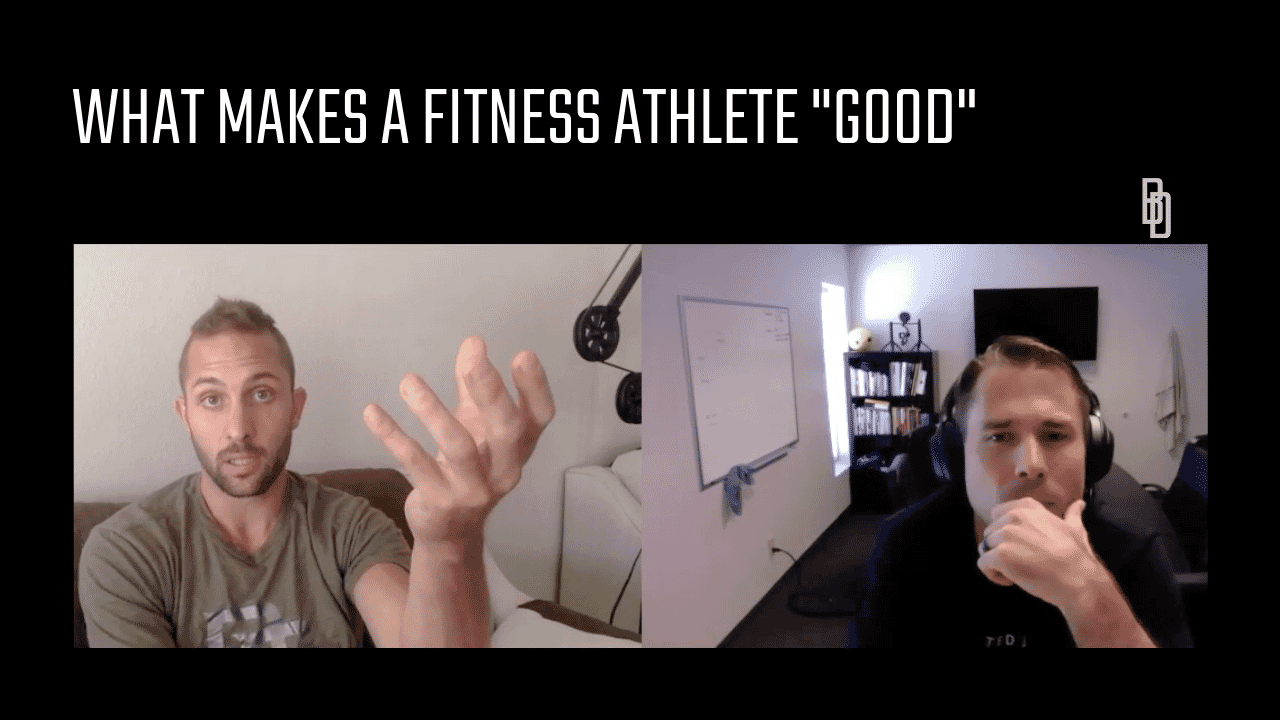 What Does Good Mean In CrossFit? Brian Foley And Jim Crowell Discuss

What Does Good Mean In CrossFit? Brian Foley And Jim Crowell Discuss

I sat down with Big Dawgs Coach Brian Foley. All I was interested in asking Brian today was “what does good mean?”

So often, people toss out the term “good” in relation to CrossFit Athletes, but usually it comes down only to if that athletes is winning at the level the person is watching them in context of. If somebody watches an athletes compete with other athletes in a local gym, the better athlete is often called “good.” If somebody is watching an athlete on the CrossFit Games field in Madison, they usually point out the athlete leading or winning and say that athlete is “good.”

I was curious what Brian thought about good in a general concept, so I asked him!

What Makes A CrossFit Athlete Good?

Brian was very calm and thoughtful in his response. He discussed a few key areas that surround a comprehensive - and holistic - view of the athlete.

Brian talked about success as a longer-term metric; he said that somebody who goes one and done in a competition isn’t good in his eyes. They may be good, but they need to show consistency of quality for Brian to categorize them as such.

Outside of their track record in competitions, Brian looks at their skill level in certain fitness characteristics. He wants to see the data. He also wants to look at the type of person they are. Brian would put great numbers and great people into the “Great” category.

How Much OF Good Is About External Results vs. Internal Feelings?

I wanted to ask Brian this question mainly for my own context generally. If somebody wins every event they sign up for, they must be good, right?

Brian goes back to data and numbers when he discusses if an athlete is good. If they have good data from multiple, or historic, competitions, they are good. He also incorporates how the feel about things, but he wouldn’t let that feeling displace the data of how they perform when it counts.

What Are Some Of The Numbers Or Workout Scores That Make A CrossFit Athlete Good?

We briefly discussed the idea of a KPI here - Key Performance Indicator. Brian then broke down a few key tests - of which there are certainly more - that help him identify if an athlete is good

It’s not just to win points if a max snatch comes out. It’s more so so that the athlete can do higher reps more often with weights around the 185-225# numbers because that is very often where competition weights, for higher reps, exist now. When the athlete can snatch 265#/185# respectively, the competition weights fall into the 70% (or so) range or below which allows them to rep them out far more efficiently by expending less energy.

Similarly to the snatch number, this muscle up number reflects their ability to build muscle endurance so they can do many more sets of 3’s, 5’s, 7’s. Imagine how much harder it is to do 5 sets of 10, for a female, if their max set is 11 vs if it is 15. It’s a percentages game in this regard. If you can get your max reps to a great number, all other movements holding equal, you are in a better position.

We also discussed the importance of this beautiful test -

30 muscle ups for time, but the athlete must perform a max unbroken set up front

This is so good because not only does it show what an athlete can do up front - you’d be amazed how many people cheat the first set (ie sand bag it with a lower number of reps) in order to “Game” the system to do 30 muscle ups faster. The second, third, fourth, etc...sets expose so much about the athletes ability to express muscle endurance and battery (the ability to do tough work, rest quickly, and do more tough work). Those athletes who can do 3 minutes on this test not only would have a solid first set, they’d recover fast showing good muscle endurance and aerobic engine on the later sets.

Let’s start here with the 60-minute row so we can all collectively gulp...Brian said he’s playing around with a 100-minute row for testing.  WOOF!

The row shows a few big things in this:

Males need to go over 15,000 meters and females now need around 14,000 meters prior to weight conversion (tough to gauge this because of the differences in weight athlete to athlete) - and apx. 17,000 for both males and females weight adjusted - in order to be at the top of their game, and Brian mentioned that many females are beginning to catch up to many males now.

There are a myriad of other physical tests, but I wanted to move into the mental game for a little bit with Brian.

What Do Good CrossFit Athletes Do Mentally That Weaker Athletes Don’t?

What Brian means by that is that good athletes have an inherent understanding to look into the future of their workout, understand what movements are coming, how hard those movements will be, and they adapt quickly to going the right pace for their best workout score.

Brian mentioned that there are two types of athletes:

Future pacing doesn’t happen once in a workout, this is something that is constantly happening way through a workout. Brian said that this can be taught and trained, but it does take a lot of work, volume, and coaching for those who originally struggle with it.

What Do Good Athletes Generally Do Outside of The Gym?

Brian quickly answered this before we jumped off of the call:

And with that... good athletes!  Thanks for reading!