I Went to Sleep in Japan and Woke Up in Texas: Ryan Schmehr

I Went to Sleep in Japan and Woke Up in Texas: Ryan Schmehr 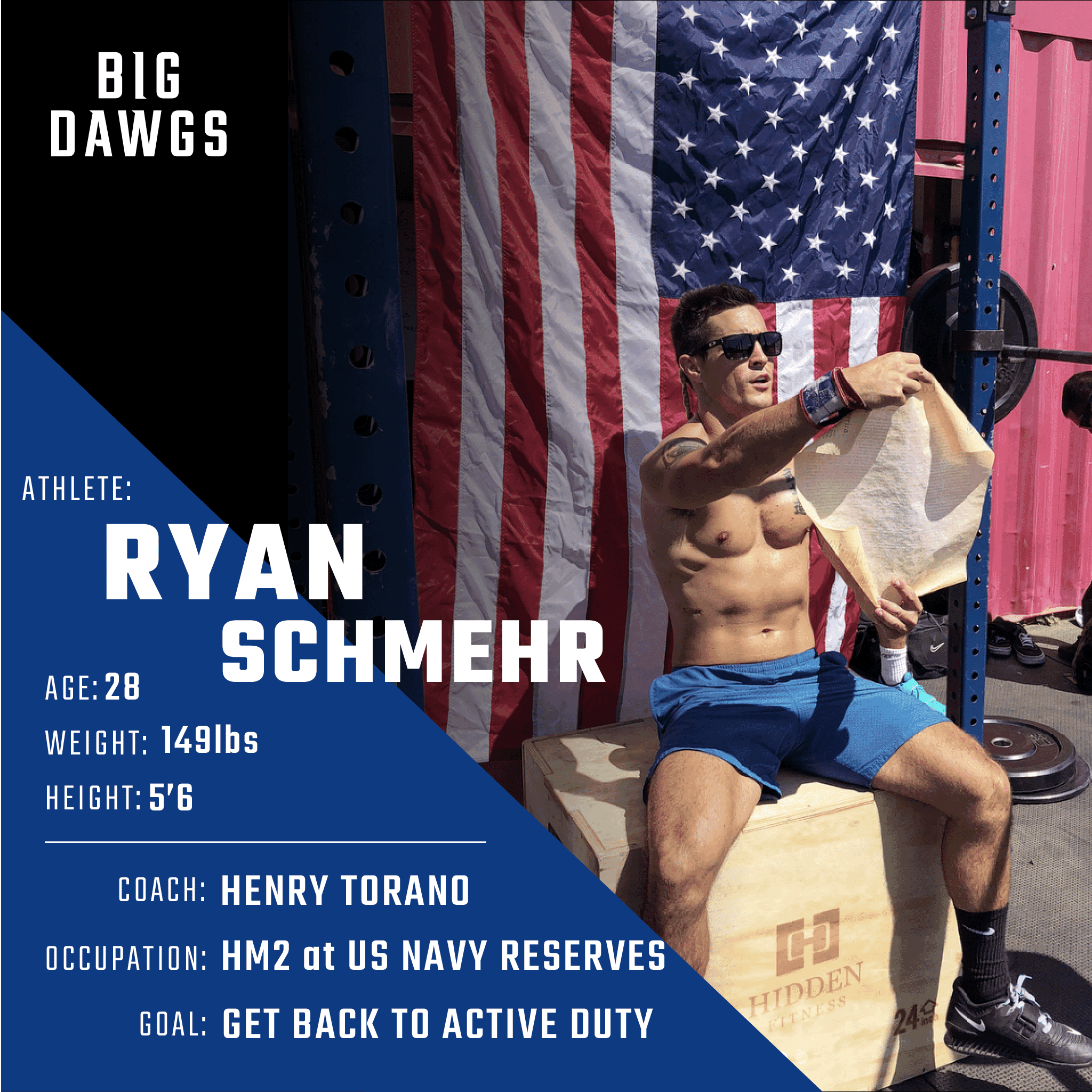 Athletics, winning titles, and D1 sports were the first half of my life up until 25 years of age. I tell you all this not to boast, but so you can hear I came out on the other side & this is MY story:

In late December 2016, I took 11 days of leave from the Navy while I was stationed out in Yokosuka, Japan. I was hoping to get to see a chunk of the places I hadn’t seen in the 2 years I had already been out there. Around day 3 of 11 into my leave, I began feeling sick, but I was determined to go explore the city. On the train there, I got very lightheaded and couldn’t stop shivering. I went into the train's restroom where they have heated toilet seats, broke heat packs out of my travel first aid pack and to put under my armpits. Once I made it to my destination, I checked into my hotel, took a hot shower, and tried to sleep it off.

The next morning, I wasn’t doing any better. So naturally, I hiked the 3-5 miles throughout the city that I had come to explore, before jumping on the train to head back to base. Over the next 2 days, I barely got out of bed other than to use the restroom. I ended up at the ER and was told I “probably” had pneumonia. About 4 days after my trip and a day after going to the hospital, I went my ship's medical department to be seen again and told them everything the hospital told me, that I 'might have pneumonia.'

I went through tests, and was told I “probably” had pneumonia..

My command prescription was a basic antibiotic pack, motrin, told me to go sleep it off, and come back in a few days.

I barely made it to the next day. I was unable to get out of bed, and I wasn’t eating or drinking. Thankfully, my roommates carried me out of bed, out of the building, and drove me back to the ER.

(From that day on, things get a little hazy for me)..

The last thing I remember is asking how long I was going to be at the hospital for..

Turns out I had Necrotizing Pneumonia: a fungal infection, and severe sepsis (Sepsis occurs when the body's response to an infection is out of balance, triggering changes that can damage multiple organ systems).

While still in Japan, I had two fully collapsed lungs, and took 98 units from blood transfusions. I was placed on life support and my family was notified I had less than a 1% chance to live. My Lead Petty Officer was told to get my dress blues ready for my passing/ceremony. I was fucked so to speak. My parents and sister flew out to say their goodbyes as I was going to be taken off life support if I didn’t improve over the next night or two.

Well as it turned out, I started to make a turn for the better, and that while still VERY unlikely, I had a small chance. The Air Force flew in their Critical Care Air Transport Team. They flew me from Japan all the way back to San Antonio, TX, on a KC-135. Due to my critical state they didn't want to use a smaller C-130 for the chance of having to stop and refuel. So over the next 15.5 hours later, I would become the longest ever, Medivac in the history of the US military on ECMO (type of life support).

I became the longest ever medivac in the history of the US military on ECMO (type of life support).

At this point in the story, I was now fully conscious, although a large number of the details of what happened I would’t find out until later on.

Day 3 of being conscious, I was being forced to try and walk, still on life support and a ventilator. The first day I couldn’t even stand on my own. Two days later, I made it 3 steps with the help of a walker and team of people holding me. The next week I made it to the nurse’s desk. A few days later I made it 90 ft to the end of the hall. Every step along the way, my parents or my friends were there to help encourage me and literally lean on. On January 23rd, 2017, I came off life support on my birthday.

I still wasn’t out if the woods yet. I had setbacks over the next 3 months while still in the ICU. One particular night, I woke up at 3 am because I was bleeding from one of my drains in my chest tubes. My Cardiothorasic Surgeon came in telling me he was going to have to rush me into surgery a day earlier than expected due to the complications. He explained the procedure to me, and that they had planned to make the incision straight through my right lat. I asked him if there was any other way to do this, because i needed my lat to be able to do pull-ups to get back into my career. He couldn’t believe what I was asking him, but upon waking from surgery, the first thing he said was “we had to wrap up surgery early because you were bleeding out. But good news is we spared your lat.”

“yeah buddy we lost you there for a little while. You were gone for over 15 minutes before they could bring you back.” 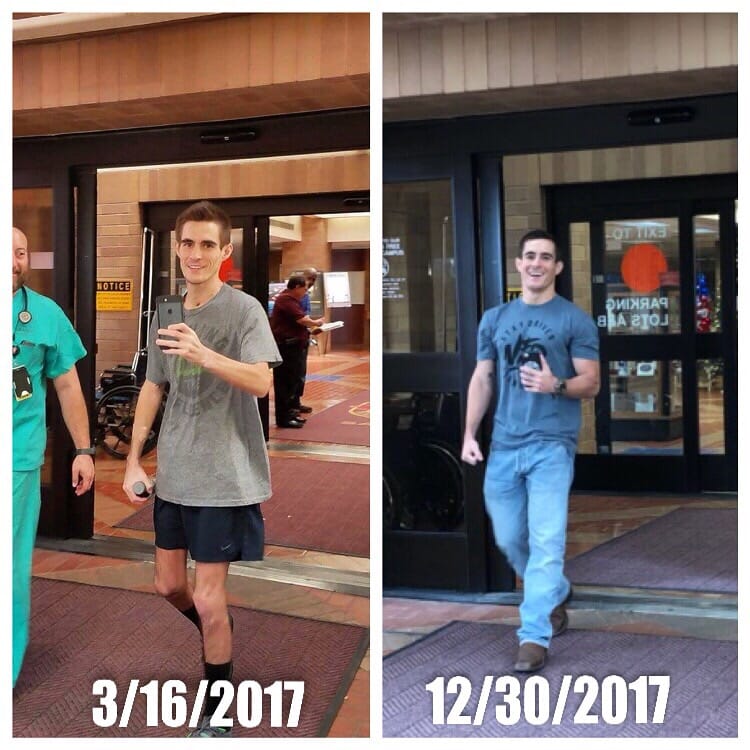 My friend called me about a month after I had gotten out of the hospital,  and said, “yeah buddy we lost you there for a little while. You were gone for over 15 minutes before they could bring you back.” It’s quite sobering to hear him say that. I hung up the phone and sat there silent for the next 2 hours just thinking about who I was, and more importantly, where I was going after this. My doctor mentioned that it was only because I was in such good shape, I made it through.

I got out if the hospital on March 20th, 2017, and drove home to San Diego, CA. All I wanted to know was how long until i’d be able to start lifting again. It was insisted that I wait 6 months to allow all my incisions as well as my body to heal. A month later, I was back in the gym. I remember the first time i tried to get back in a squat rack, I fell over with just the bar on my back. I didn’t have the strength in my legs or my core. I was embarrassed to say the least. All I could think of was the athlete I used to be. But the next day I was back in the gym, and the day after that. I became obsessed with not only getting back to where I was, but stronger than I used to be.

8 months after being released released from the ICU, I was cleared to return to wrestling by my doctors. They couldn’t believe the progress I made in such little time. But “Big Navy” as we call it, had other plans. They didn’t want to let me go back to the wrestling team, let alone a special warfare training pipeline. I was devastated. How could they just dismiss me after all the work i I put in to get back. I felt cheated. I felt confused where to go next and what I would do with my life and career. I rode out my enlistment and re-enlisted in the reserves in hopes of fighting my way for medical waivers and returning to active duty to try and fulfill my dreams.

It’s been another year now though, and it doesn’t look like i’m going to get to return to either of those things. It passes my mind often “what if I never find a passion like what I had before”? It is times like these that I stick to my faith and blind belief, that everything will work out. I also am trying to get over the nerve damage in my right leg that I received from my hospital stay. The pain while running has been so bad that at first I could only make it a quarter mile.

It is times like these that I stick to my faith and blind belief, that everything will work out.

-> Enter Big Dawgs here.. I realized I didn’t have all the tools or knowledge to do it all alone. I met Allison McKail, who after hearing my story, introduced me to Coach Henry Torano. I’ve been working with Henry for 4 months now, I’m seeing great strides in my strength and aerobic capacity. He’s a great dude, and wouldn’t want to be going at it with anyone else. I’ve also gained an incredible passion for fitness and learning, and I can see myself in this field if things in the Navy don’t work out.

I’m up to a mile consistently now, while only at a jogging pace. The pain is still more than I can take some days. I’m at the point in terms of recovery time, that it might not get any better. But i’ll tell you what, i’m going to keep pushing with what I got for as long as I live. I’ve been truly blessed to have gone through everything I have the last 2 years, because it has made me every bit of who I am today. The struggle and pain keeps me mentally sharp and in the belief i’m still not where i’m meant to be yet. It keeps me going.

In some ways, I don’t want the struggle to end because it has become such a part of me. I still want to do an ultramarathon & Ironman at some point. I want to push myself in competitive fitness as far as I can. I want to be the best I can possibly be.

My last message to you is that, it’s not about beating the guy next to me. It’s just about pushing my absolute limits physically and mentally, and competing with myself. I’m blessed to be here, and i’m not going to waste my second chance at life. I don’t have time to settle on  mediocre.