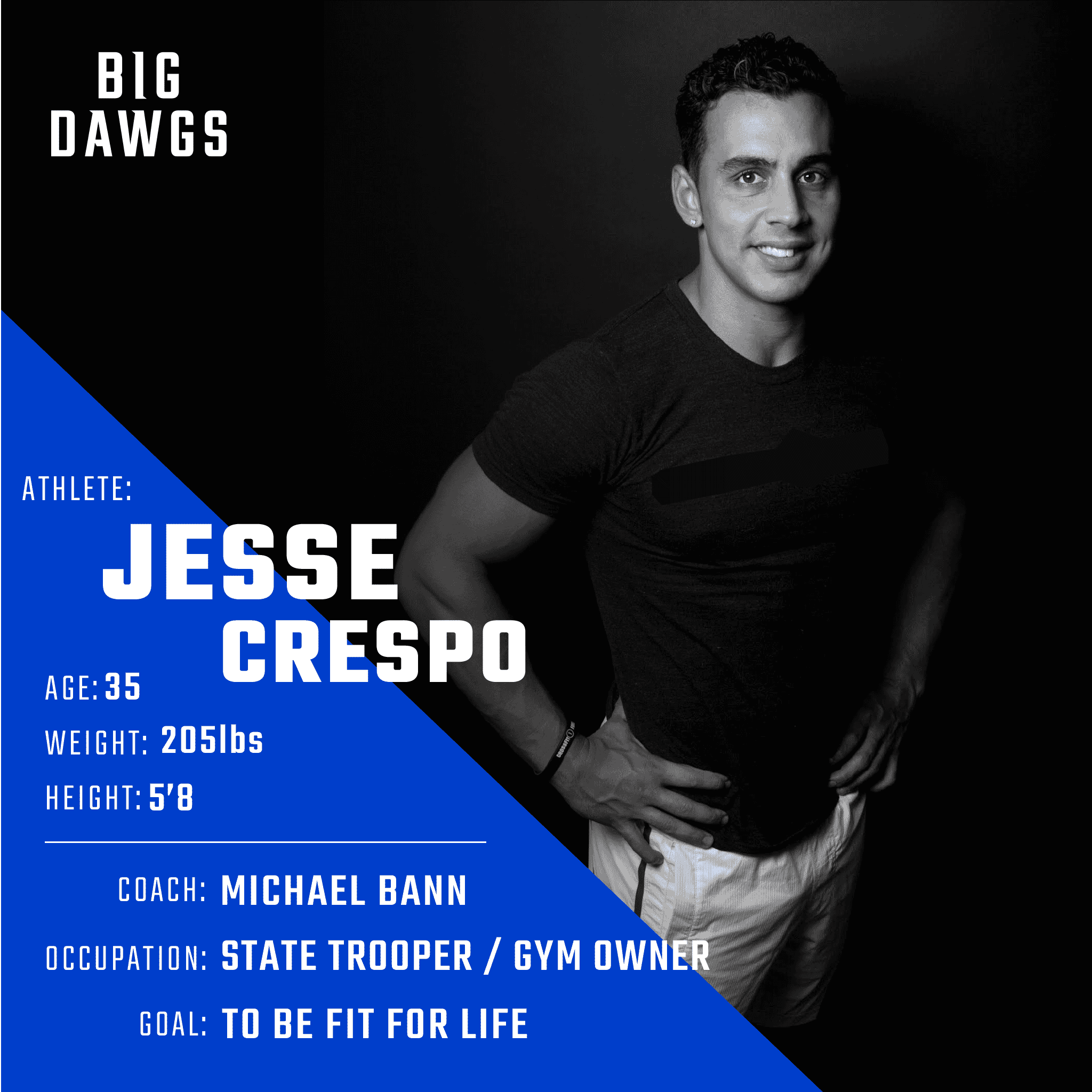 I GOT A REALLY BIG TEAM

Man am I lucky. When I had three strokes in March during a routine surgery, my life was literally on the line. Support came from everyone, everywhere and it was overwhelming. At first, I fought it. The fact that we needed help was really difficult to accept, but I learned to embrace it. I had no choice.

Family members, friends, New Jersey State Police, Pennsylvania State Police, CrossFit 1Force along with 60+ gyms, former members, my fluffy best friend Rico and hundreds of nurses/doctors/therapists helped to save my life and keep my family whole when I was out of commission. I now look back at this health crisis as an opportunity to learn and grow as a person. Nothing can be done alone. I just want to say thank you from the bottom of my heart to everyone who helped me. I will be forever thankful for all you beautiful souls.

Man am I lucky. When I had three strokes in March during a routine surgery, my life was literally on the line. 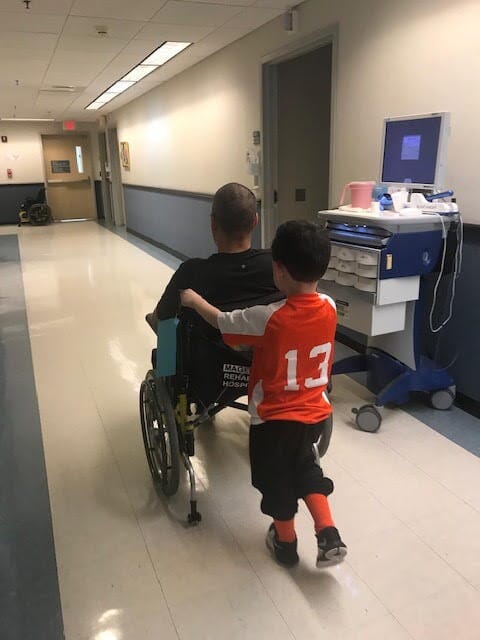 YOU GOTTA BE FAST

The acronym F.A.S.T will forever stay with me. I only wish I had known about it before I suffered multiple strokes. Strokes can happen to anyone at anytime no matter how fit and healthy you are.

I was recently told from my amazing coach Michael Bann that I was one resilient human being.

I was recently told from my amazing coach Michael Bann that I was one resilient human being. After he said that, both Erin and I were moved to silent tears. We knew in that moment that this resilience was what had kept me alive.

I have my father to thank for that resilience. He didn’t have the greatest childhood. He would get into fights in school, never took school seriously and hung around the wrong group of people. My Mom got pregnant when he was 19. Most kids would have thought, “my life is over.” I like to think this is when my Dad’s life really began.

After I was born, he made sure that we were fed, clothed, and had a roof over our head. He had multiple jobs and was always looking for an opportunity to grow and provide for our family. For the better part of a decade, he was chasing his dream to become a police officer. I remember at least 5 different departments chose not to take him during the final phase. He was frustrated at times, but the dude never stopped. He finally received his opportunity at the age of 36. Most people are 10+ years into their career by then, and he was just starting his. He is now an awesome Detective known for his gang knowledge and ability to get drugs off the street.

He’s 54 years old now and just received his Bachelor’s degree and looking to start his masters. This recently inspired me to finish my own degree. I’m grateful for his example, making me the resilient human being I am today. 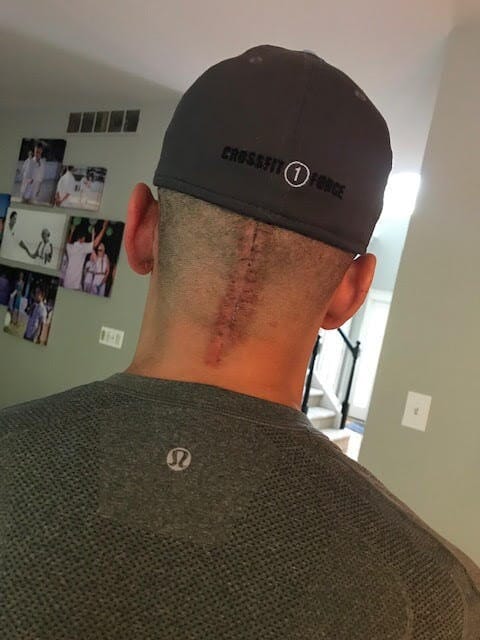 YOU MUST BANK IT

I started working out when I was fourteen. I played three sports in high school and always made it a priority to work out in my off seasons. Later on, my CrossFit coach/mentor/friend (and owner of CrossFit Milford) Jason Leydon sent all his athletes an email. He compared fitness sessions to “deposits” into “physical bank accounts.” That moved me, and thankfully so. Looking back, I was making myself very hard to kill.

Every day you have an opportunity to improve your fitness. Make the most of it and create as much wealth as you can because you never know what could happen. Multiple doctors and nurses would see me throughout my recovery and say “you shouldn’t be doing what you’re doing right now.” I attribute my accomplishments to the size of my physical bank account.

Not a day goes by where someone doesn’t tell me how lucky I am. Coming out of an emergent craniotomy, I didn’t always feel lucky, but I know I was. Or what I really know is, I created my own luck. I’d like to thank my fourteen-year old self for being curious about fitness. He didn’t know it at the time, but he was preparing for something much bigger than a Friday night lights football game.

I’m starting to build that bank account back up again with my new coach Bann. He’s a genius that geeks out over my nutrition and blood work so I can be the best version of myself. Hiring Bann is the best investment I’ve ever made for myself. I remember telling my wife in the hospital before I could even walk unassisted, I want to hire this guy as my coach. The next day she had scheduled a consultation with his manager. Turns out, his team had known about us and what happened thanks to the power of our network. Having that appointment gave me something to hold onto that I could control: how much effort I was willing to put into my recovery. It was my day one.

I’d like to thank my fourteen-year old self for being curious about fitness. He didn’t know it at the time, but he was preparing for something much bigger than a Friday night lights football game.

YOU HAVE TO BE YOUR OWN ADVOCATE

I was fortunate to have some amazing doctors during the last six months, but I did have some horrific ones too. Many of them flew in and out, teaching their colleagues and discussing my case, but did not always stop to talk to me and look at me as a whole person rather than just a specific specialty or body part. My suggestion to anyone in the medical profession is slow down and focus on the quality of communication for each patient. Don’t kill someone by waiting on someone to call back or consult. Listen to what your patients are saying, no matter how fit they look or what their numbers tell you. There could be more to the story.

Throughout my journey, I fired a nurse and two of my main doctors. It was just that bad of service. My point is, no one will ever care about your health more than you do. My wife did an amazing job of advocating for me when I couldn’t do it for myself and retained every single thing that every doctor ever said to me. Most of the time, I asked her, “what the hell did they just say?” Erin had a journal of all the notes, and many times the doctors contradicted each other. When I was finally able to advocate for myself, Erin put me back in control, which was the best thing she could have done for me.  I own it now.

You need to take ownership of your well-being. Sometimes, it’s up to you to figure out what’s wrong. I have done every test under the sun and they still haven’t found shit wrong with me. I will not stop until I get an answer on why this happened. I will always keep my near death experience close to me as a motivation to keep my actual death in my far future. 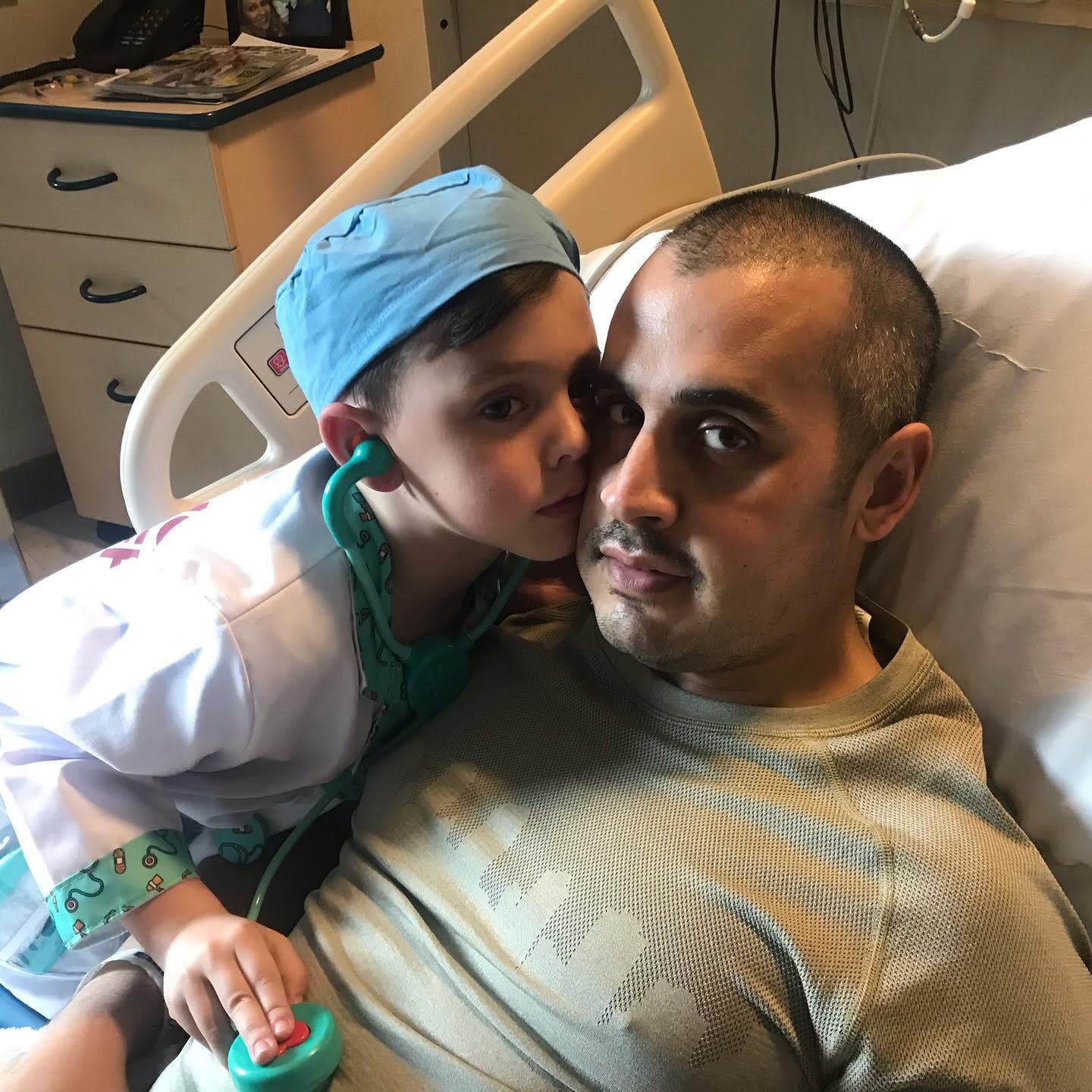 ALL YOU NEED IS LOVE

When I was a young boy, I got picked on by some kid twice the size of me at the park. My dad went to the park an hour later and raised hell. He basically went up to 10 people at the basketball court and called them all out. He is a savage and doesn’t take shit from nobody.

My mom always told me, “You’re a lover, not a fighter.” She was right, because my kid is clearly the same person as I am! I see myself in him every day. Just like Cruz, I truly have love for everyone I have encountered in my life. If you haven’t felt loved by me, I apologize. I’m working on being a better version of myself and expressing my love towards my wife, children, close family and friends.

I’ve always spoken my mind, but now I do so more than ever, and I try and think about what I say and how it will make people feel before it comes out. I like to think that all the love I have received during the past six months is because of all the love I gave away. I would like to be the kind of person that walks into a room and gets love from everyone in that room.

Am I ever going to be perfect? Far from it. I’m often quiet, and I enjoy being alone. I don’t ask for help for daily tasks when it’s clearly needed—and now I need more help than ever.  My life is a work in progress, and I will love every single second of it, even the hard ones, because I can. I’m here and I have so much left to do.

When I finally do die, I want the joint to be so packed that it will take you hours to get to see me in that coffin. If my funeral is a mob scene, that will mean I did my job by loving and respecting you all with all that I have.

I leave you with one question: where do you want to be six months from today?