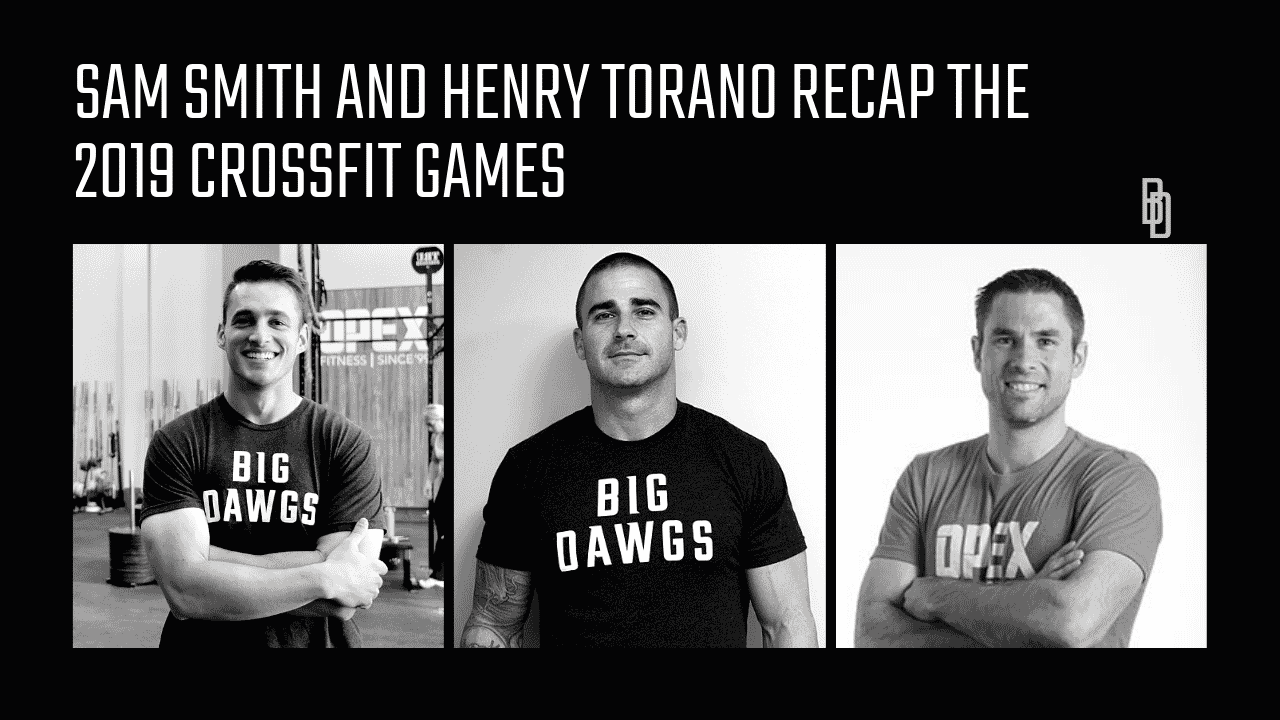 I spoke to Big Dawgs Coaches, Sam Smith and Henry Torano, and we spoke about what they saw in the Games this year, what they and their athletes felt with the new and unique workout announcements and cuts, what types of workouts they believe will face athletes now and into the future, and how they will prep their athletes to continually reach for more in the sport!

When You Were On The Ground At The CrossFit Games, What Conversations Were You Having With Other Coaches?

Sam and Henry both really paid attention to how athletes warmed up days prior to the Games. Sam mentioned that a number of athletes were doing very heavy Olympic lifting, snatch or clean and jerk, heavy back squats, or very tough “grindy” workouts. Sam pointed out that certainly that opinion is his (and Big Dawgs’) bias in terms of best preparation.

I asked them why they felt that training hard leading into the Games wasn’t the best idea. Sam responded that he most worries about his athletes losing confidence by going for too much and missing. When athletes burn the system down and get sloppy, their bodies remember that slopiness and it hurts their confidence.

“Why would you challenge all of the confidence that you’ve built up over the last few months all over a few hard days’ training prior to the Games.” - Sam Smith

When you think about that, it makes a lot of sense. Athletes need a fully “topped up” CNS - central nervous system - to be able to attack workouts for 4 intense days. Pushing the envelope prior to the Games doesn’t improve their fitness levels, it challenges and potentially costs them a full CNS, and making a lift they’ve made before likely doesn’t boost confidence, but if they miss a lift they’ve hit it may shake them.

What Did Henry Think And Talk A Lot About At The Games?

Henry immediately went into “wondering.” He and Yuyi often questioned when they’d learn what the workout(s) were going to be. Yuyi is the type of person who likes to think about a workout the night before, so it stressed him out to not know what he would face to open the Games. Couple on top that the field was cut in half after the first workout and you can see that the stress levels of athletes were likely high.

What Worked Well For You And Your Athletes To Get Through The Confusion Of The Weekend?

For Henry, he reminded Yuyi that he came in fit, he told Henry he was fit, and that he was ready. There didn’t need to be more thought than the plan to attack the workout in the best way he could.

Sam discussed that he wanted to work hard with his athletes to really focus on one event at a time. The different formats and the cuts made it challenging, but it actually helped athletes have to take every event one at a time and focus to do their absolute best because if they didn’t, they’d be sent home. Even though the events weren’t in Nick and Colleen’s wheelhouses, they did really well at executing their game plans and placing well for what they could do.

What Went Poorly For You And Your Athletes?

Henry said he was really happy with how Yuyi did even though he went home after day 1. He was a National Champion who took this experience more as a once in a lifetime experience (hopefully not!) so he left it all out on the field. That said, one place where he really struggled was on the rope climbs. More specifically, he struggled because he’s never jumped from such a thick soft pad up to the rope. He felt like he was starting right from the floor. Every experience like that helps to shape and improve an athlete to be more prepared for the next competition.

“Holy Shit, I can’t jump up to the rope because the pad is so soft” - Henry Torano’s athlete, Yuyi Aldaño

Sam discussed how Nick and Colleen unfortunately didn’t get workouts that were “great” for them based on their size and strengths (strength work and simple odd object and grindy work), so they had to fight right out of the gates. The first 6 events were heavily gymnastics and running biased which exposed where Colleen and Nick simply weren’t as elite as others.

How Will You Help Your Athletes Prepare For Next Year’s Competition?

Henry’s guy was ready to roll for where he needed to be, so Henry wouldn’t necessarily change a bunch of training. However, Henry would absolutely throw some forks in the road to simulate a bit of chaos for his athletes. To do that, Henry is going to do some gnarly, chaotic simulations throughout the year.

Sam was also really happy with how his athletes competed. The things they have been working on have been improving, but they just need to get better. They need to improve in:

This year’s CrossFit Games highlighted how important gymnastics and running-type endurance are to athletes….right now. Sam mentioned that the “most important” aspects of the Games does change over time, but right now there is a lot of focus on the above movements. To help his athletes improve, Sam’s going to watch a few specific metrics even more closely. Some of those metrics would be:

What is one thought on Sam and Henry's whiteboard for the next 365 days to focus on for the year?

Henry quickly responded that he’s going to focus a lot on running for his Games Athletes. With 150 athletes in the male and female fields at the beginning of the weekend, it’s much easier to run athletes vs to row or big or ski erg them. Henry believes all Games Athletes will need to be runners in bigger and bigger capacities.

Sam mentioned that he really wants to focus on bodyweight movements with his athletes. Even with as much work as they’ve done, they’ll need to do more of that with how much the Games has been and likely will test it.

More chaos, more metrics (seems like those two are both opposites and the same thing haha), and a lot of running and bodyweight work!

We hope you enjoyed. Ask us any questions you have!