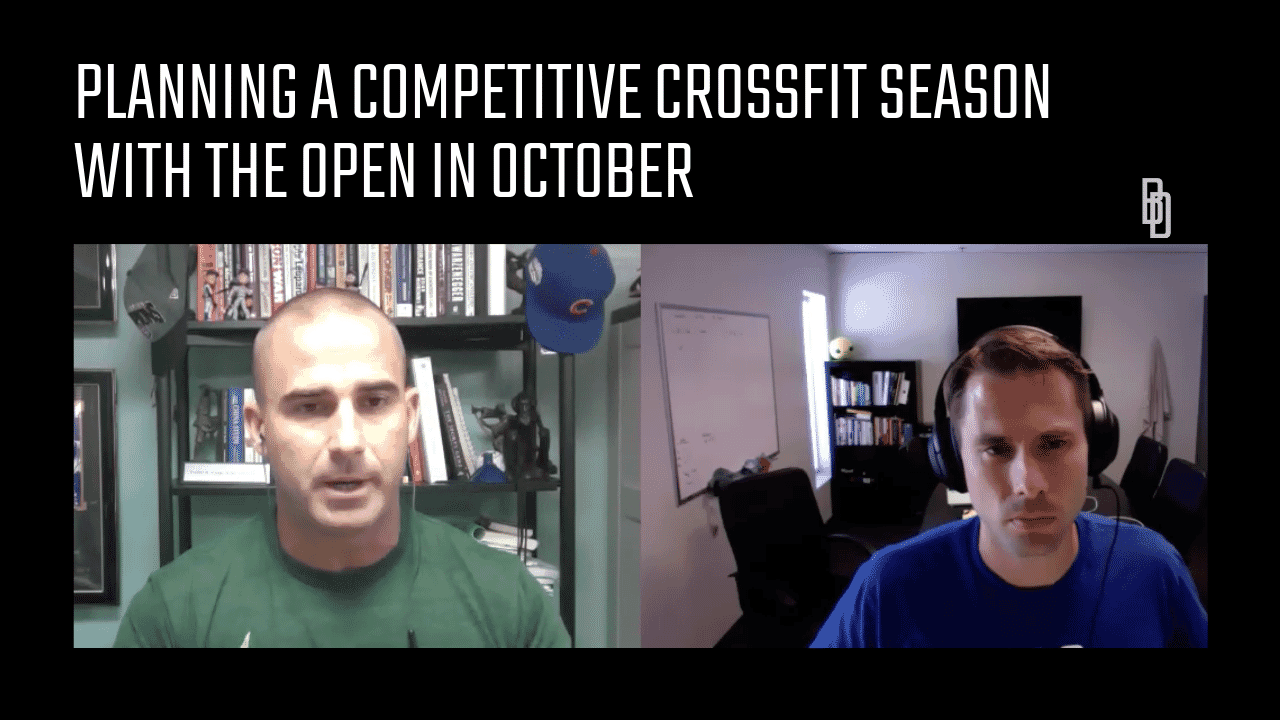 Planning a Competitive CrossFit Season With the Open In October

Planning a Competitive CrossFit Season With the Open In October

Henry Torano had to do this call over 2 weeks because of the storms heading over Puerto Rico, so we were lucky to get this one in!

We had a great conversation about organizing somebody’s season in the best way for them to succeed in their competitions while continuing to improve throughout the year.  Throughout this conversation, Henry and I discussed:

Henry immediately went into saying that that “quite frankly, it’s a shit show” haha. Henry mentioned that a lot of people may expect that with this season change this year that it won’t change again next year. However, as Henry pointed out, you just never know what is happening, so Henry always tries to keep his athletes focused on what they can control and nothing else.

Some of Henry’s athletes came off of the CrossFit Games, so they haven’t had a proper rest. They need to make some challenging decisions as to where their priorities are because Henry doesn’t want to hurt their long-term progress by putting them back into a priority competition too fast - priority meaning he would peak their season for that 1 event.

Some of Henry’s athletes did the CrossFit Open in March of 2019, so they will have apx. 6 months to prepare for this Open. Some barely survived the Open (CNS-wise - Central Nervous System) while others felt strong coming off, so Henry will speak individually to his athletes to gauge their goals and how they feel to determine the best course of action as to what makes sense for them competitively.

With the Sanctional events essentially set, and many of those Sanctionals using similar online qualifiers to determine who gets invites or not, things appear to be calming down a little bit where athletes will be able to find their rhythm again after this year’s (2nd) CrossFit Open.

Are You Having The Conversation With Your Clients About This Year Feeling Like A Shit-Show?

Henry disclaimer’d that by saying that each conversation must be unique for each client because they have different needs, resiliencies, and goals. Henry’s CrossFit Games Athlete is most likely going to do the Open as part of his training but not try to peak for it. Henry doesn’t want his big-picture progress to fall away by overdoing it after his first trip to Madison.

Another one of Henry’s clients has a real chance to make the Games as a country winner. He did the Open and has since had 2 competitions in June and July, so Henry has advised him not to peak for the Open this year in order to avoid burnout. However, Henry’s client is 35 years old and doesn’t have many years left to make this run, so he’s decided - with Henry’s support - to go for it this year to see if he can fulfill the dream. As long as Henry provides his clients with the best advice that he can give, his coaching relationship will remain in tact and his clients will continue to progress.

How Are You Going About Laying Out A Season (Year) Training And Competition Plan For Your Clients?

Henry mentioned that he appreciates that CrossFit removed Regionals because so many clients no longer freak out about Regionals. While Regionals was a great event and many clients really enjoyed the process of reaching them, Henry has seen a lot of stress drop off from clients which has allowed a lot of his clients to make more progress and enjoy in-person competitions.

Henry also mentioned that he and his clients have really enjoyed training for Sanctionals vs the CrossFit Open because they can peak their training for 1 weekend as opposed to 5 weeks with anywhere from 1-3 (ya, 3 sometimes haha) hits of Open Workouts.

Subsequently, I asked Henry “What does your typical athlete anticipate for their number of competitions per year?

Henry naturally mentioned that his clients want to compete every weekend haha! Henry, as you can tell from the video, doesn’t mess around with his clients on that. He acts as their coach, not their cheerleader. He helps them define the competitions that matter to them and then he prepares them for those comps.

Once they define what competitions are really important, Henry helps them understand what they can physically and mentally handle during the year.

From there, Henry made a profound statement - CrossFit Athletes shouldn’t peak more than once per year.

CrossFit Athletes shouldn’t peak more than once per year

Peaking once per year doesn’t mean his athletes don’t compete more than once per year, it means that Henry’s training plan for them places the emphasis of the year on the top priority competition and the training and competitive season reflects that. If somebody wants to do a Sanctional competition, but that Sanctional isn’t the top priority, they can do the event but their training will not take a real dip/deload/peak/compete/big rest “peak” layout. They may taper a little training the week of and then go compete, but no more. That allows ongoing progress to happen while still getting big competition focus and fun in the mix.

How Does Henry Look At The Competition Year On The Whole?

I’ll bullet point this for clarity:

For clients and athletes who are too anxious or too intent on competing every weekend, Henry outright tells them that he won’t help them. He knows that it will burn people to the ground if they go hard too often, so he just doesn’t allow it!

Training builds you up whereas competition really breaks you down

Henry mentioned the above piece on training vs competing because he needs his athletes to understand that they must rest after breaking themselves down.

Henry have some great advice for athletes to view this October Open. Athletes can use this Open to gauge where they are so that they can go back through their season layout more effectively than they could without that competitive information. However “good” the athlete is, whatever the competition desired is, whatever the competition division is, this works the same, and it’s why it’s so important that Henry personalizes the entire training design for his clients. Without that personalization, those clients would be doing training that focuses on somebody else (or nobody) and they wouldn’t give themselves the best opportunity to express their year’s worth of training in a few wonderful events each year!