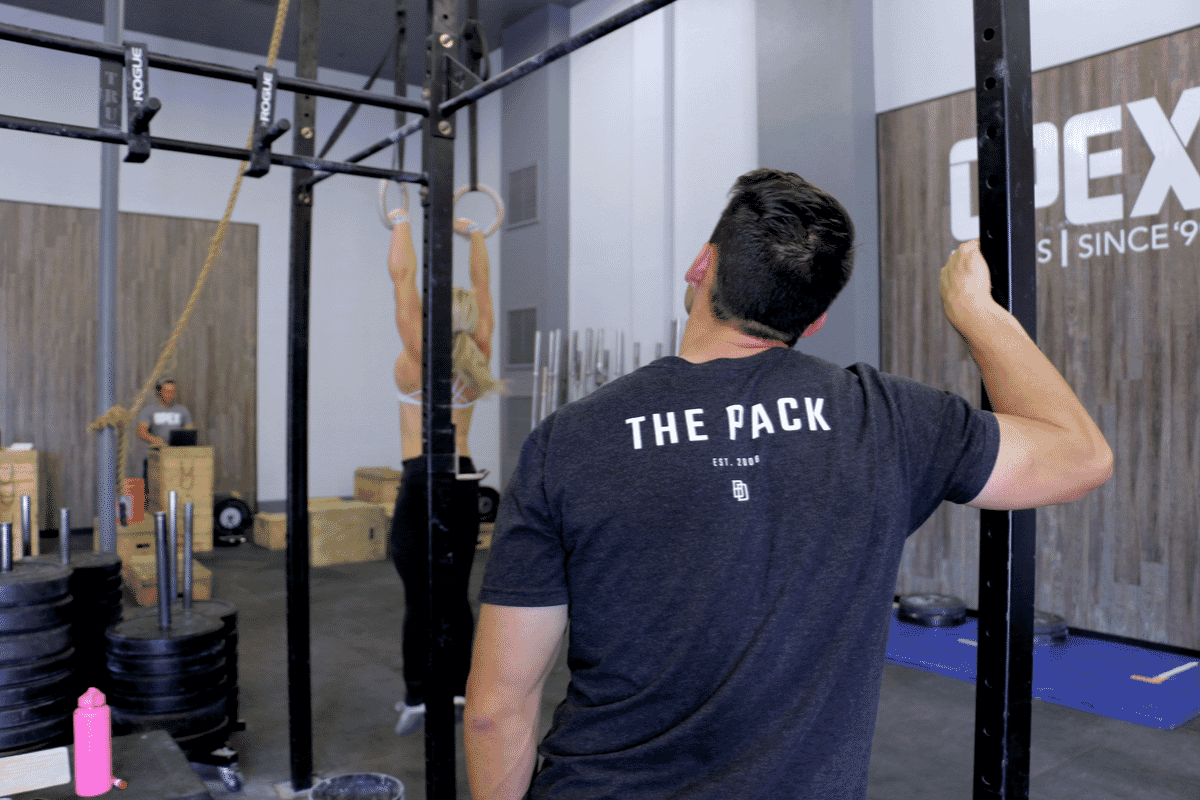 Note - if you want to check out how Sam thinks about optimizing your Open performance, check out this article and video - What Is And How To Optimize Your CrossFit Games Open Performance.

Sam began this conversation by saying that you want to have confidence with each workout whether you do the workout one time or 2 (or 3 times) which means that you must have the volume built in to be able to repeat a workout strongly and not burn yourself out for subsequent weeks.

To build the requisite volume/capacity to do that, we spoke about how Sam would build specific movement capacity, and then we touched on CrossFit needing numerous movements to improve throughout the year which makes it very unique athlete to athlete.

You have to see how somebody did, not only placing-wise, but also how they handled each week and the entire 5 weeks mentally and physically.

Within that look back, you need to see how much volume they were able to output in each Open workout. Sam used the example of somebody who was only able to do 40 (of 50 in 19.3) strict handstand push ups. That is a “check mark” in the “needs more volume” category that Sam jots down.

You’d then look at the rest of the limitations to see what needed improvements and begin to build the annual plan.

The plan must begin in a low fatigue environment. Just because you can’t do 50 strict handstand push ups in a fatigued state does not mean you immediately re-test that workout every week for 52 weeks. All that does is teaches you how to suffer through handstand push ups. To build proper capacity, you must be able to do movements with efficiency even under fatigue, and you build that initially from a place of non-fatigue

That means that you start in a lower rep, lower-fatigue environment, and you begin to build reps - total volume - without fatigue. You would begin approximately where you could do 50 handstand push ups over the course of an entire training session.

You would also hold back additional complexity in the beginning. It’s only after you have built total volume, let’s just call that 80 total reps in a workout, that you would bring in more complexity/stress to their training regiment. An example would be that you may be handstand push up volume for 8-10 weeks, and then you’d add in the complexity of doing additional movements - perhaps a handstand walk like that of CrossFit Open workout 19.3.

After the complexity, you’d add additional volume with the added complexity.

After that, you’d look to add some intensity to it and then test to it - under fatigue.

After that, you’d go back through this same process except you’d start at a higher/better point and build volume off of that. Perhaps now you’re building to 100+ reps in a single workout, and perhaps you then add even more complexity to the movement. At that point, perhaps a month out, you’ll be ready to begin testing the exact CrossFit Open-styled workouts that you’ll likely face.

At that point, you should be able to express, recover, and adapt well to fully feel ready and confident to nail the CrossFit Open. 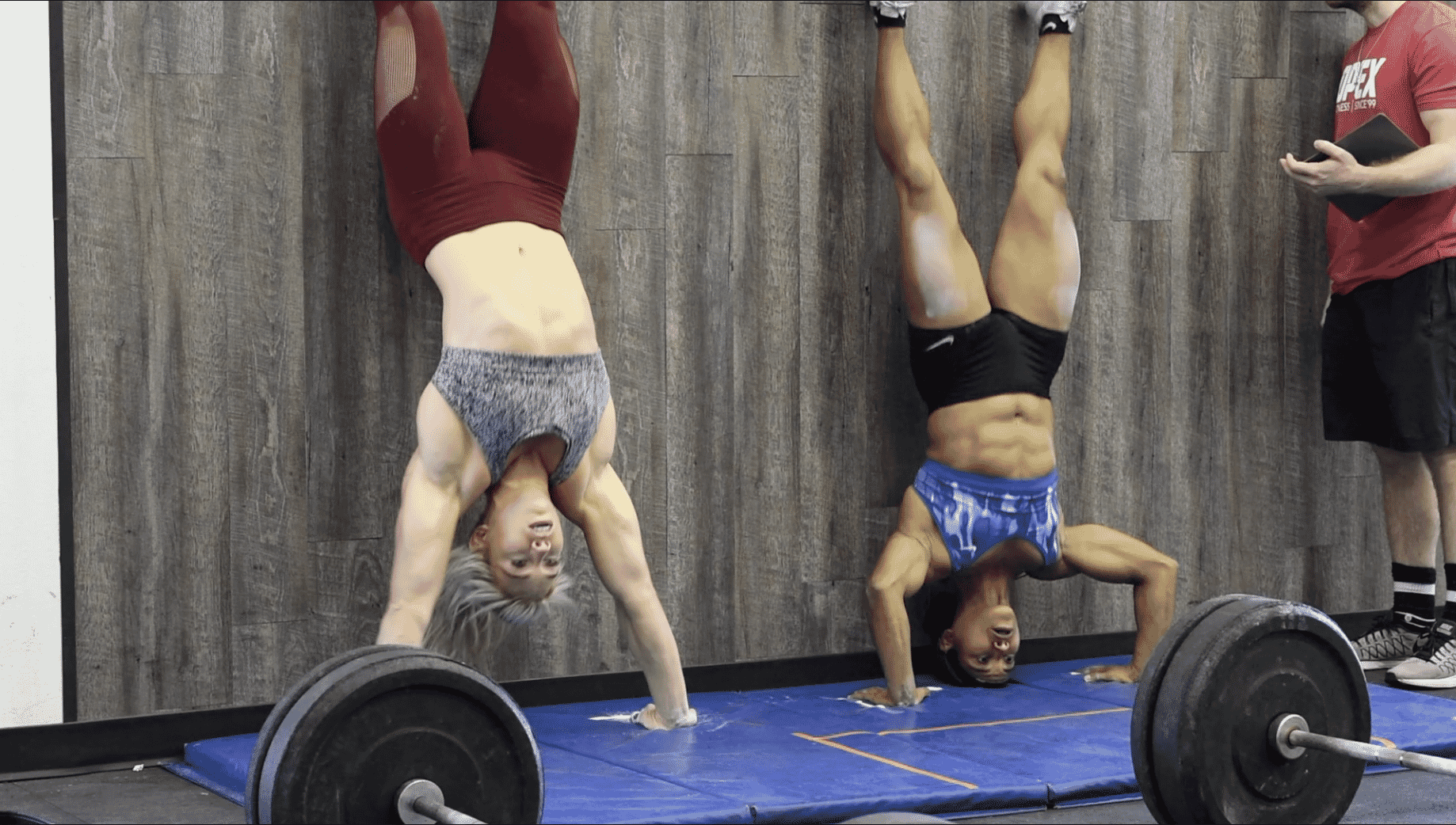 How Do You Improve Multiple Exercises Over The Course Of A Year To Prep For The CrossFit Open?

Notice Sam’s above explanation didn’t talk about a bunch of movements, but you need all movements to progress in CrossFit, right?

Absolutely you do. This is where priorities and total training volume come into play. Additionally, this is where understanding your abilities, stress levels, and your entire season schedule is important. With each additional competition you do, you’re pulling away your ability to progress your total volume and progression of multiple movements because you’re stressing your body by intensely competing in each competition.

Taking the above ideas, you’re going to follow the same type of progression for multiple movements. You’ll still go:

The “better” you are, and the more total volume you’ve built - over years - allows you to progress more movements and more total volume because your body has built the movement patterns as well as the volume.  And, as always, you have to be very clear about how you’re feeling and what your results look like. If you add a bunch of volume, but you find that you’re not able to recover and adapt between workouts, you have to be smart enough to pull volume back to a point where you can effectively recover from.

Sam mentioned that he often looks at the bigger trends, year by year, to see what movements have higher likelihood of showing up and mattering a lot to your placement in competitions.

Please know that it’s still very important to be strong, aerobic, etc...but if you can’t hang in there on bodyweight movements, you’re going to fall short in CrossFit competitions.

That leads Sam to watch closely and progress those bodyweight movements an awful lot with his athletes around the world.

On the flip side, Sam mentioned some of the less important movements or movement types for the CrossFit Open. An example of this would be with maximum strength - 1 rep maxes - are simply less important. If we expect the Open to have 6 scores workouts (sometimes it’s 5, sometimes 6, sometimes 7) , only 1 of those scores has ever been a maximum lift, and more often than not that heavy movement comes with a caveat - you must repeat that heavy weight multiple or numerous times. That is more of a CP Battery workout than it is 100% of max workout, so max lifts simply aren’t as important for CrossFit Open success.

At the end of the day, you must continue to build movement volume in a way that actually helps you improve as opposed to suffering. If you take a longer term view of this, you can continue to improve for years as opposed to going a 1 and done and not performing at your peak during a competition like the CrossFit Open.

Best of luck to everybody. Let us know how you do!