Whitney Reese competed at the CrossFit Games in Carson, California in 2010, but she was training at a high level prior to that when the Games were in Aromas, California. Fast forwarding to today, we’re both excited to watch an “old school” competition at the Ranch this year.

What do you expect, characteristically, from the Games this year?

A big thing that Whitney discussed right away is that the equipment used for the Games cannot be as “big” as it was in previous years. There won’t be a huge Rogue Zeus rig, and there won’t be new pieces of equipment for the teams because the teams won’t be competing that weekend. That means that, at least theoretically, we’ll see a lot of workout equipment we’ve seen in the past - though we wouldn’t be surprised to see something wild thrown in to spice things up!

Additionally, you’d expect to see some similar characteristics that you’ve seen in the past such as the hill (trail) run as well as an increasing weight “ladder” on the workout floor. Whitney noted that historically the winners of a longer run as well as the winners of something like a deadlift ladder did not go on to win the Games because expressing those fitness characteristics are often difficult to follow up with the opposite - ie, if you win a deadlift ladders, you likely aren’t as equally gifted at long runs. Both Matt Fraser and Tia-Clair Toomey will certainly make a noble run to prove this theory wrong.

With classic Aromas/Ranch events such as 3 rounds for time, Kettlebell Swings and strict parallette handstand push ups, burpee deadlift, etc...we’ll likely see a simpler overall event than what we would have seen at the massive Madison, Wisconsin venue, so Whitney expects those 4 characteristics to matter greatly again.

Whitney threw out the idea that we may see a mountain bike ride at a sprint distance. Just like the trail run, a mountain bike race that incorporates an awkward trail would be something an athlete would have to quickly adapt to - there is some risk/volatility of that which favors people who adapt quickly and fear nothing.

Whitney doesn’t anticipate a swim this year just due to the logistics of traveling there, so she doesn’t expect that people are training swimming outside of for recovery purposes right now.

Can Matt Fraser and Tia-Clair Toomey Be Beat?

Whitney would be shocked to see either one of them not end the weekend on top of the podium. They are both extremely strong as well as enduring, and they both have very good upper body gymnastics density. If the test is shorter than we are used to from Madison (which it’s likely to be), Whitney thinks that the field may remain closer to Toomey and Fraser, but Whitney still thinks they both win whether we go longer or shorter.

Will there be shooting - guns - at this year’s Games?

“I would love to see shooting in these Games!”

Will there be a new rig put up for this Games, or will they leave an old-school rig up?

“I would love to see an old school rig up that shakes every so slightly.”

If they leave an old rig up, will athletes be more likely to shred their hands?

“No, they know how to do hand care of their hands and use grips at this point.”

(For the individual athletes) Does it matter if there are no teams competing at Aromas?

“It will change the emotional charge in the environment.”

Does it matter that there are no Masters/Teens competing at Aromas?

“I think it does, but not for the competitors who are there for themselves.”

Does it matter for the athletes’ placement that no crowd will be there?

“Not for the athletes that are competing to maximally express what they can do. For the athletes who are there for notoriety, not having a spectator will hurt their ability to perform.”

Who are you most excited to watch at this year’s CrossFit Games in Aromas on the male side?

Who are you most excited to watch at this year’s CrossFit Games in Aromas on the female side?

Will there be a massive bombshell (going somewhere off site) event occur at this year’s Aromas CrossFit Games?

What a fun conversation! 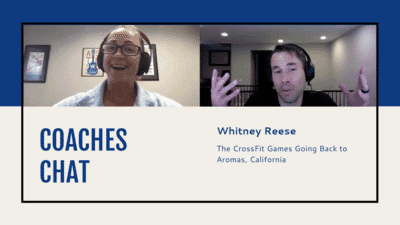