"I know that I need an edge to win"

I spoke to Big Dawgs Coach, Will Trujllo, on his birthday, and we got into a really interesting conversation about how he and his athletes find their personalities that optimize their competitive results. If you think about athletes who are at their best, they often have a style to them that is consistent. Some athletes are on the cockier side, some athletes are extremely internal and quiet, some athletes are nasty, the list can go on and on.

The beautiful part is that when you find your style that helps you perform at your best, you can then duplicate it over and over so that you find the zone more often.

“I’m not the world’s best shit talker, but I wanted to be aggressive”

What Is Will’s Competition Style?

Will made no mistake about it; he performed his best when he was aggressive toward the people he was competing against. Sometimes that came out as a more angry tone, sometimes it came out as icy focused, but however he cut it, Will needed to see his competition as a villain.

If that idea makes you a bit uncomfortable, it may be because athletes are often asked to be both role models and high performers. Often people want their athletes to be the nicest people on the field, but acting that way - for some - costs them performance. This is why this topic is so important. You must learn how you tick in order to perform at your best. We’re all for respect, and we expect our athletes to act like adults, particularly off of the floor, but we encourage them to seek out how they perform their best (within reason haha) because it is their full expression of themselves which allows them to get the most out of themselves physically.

When Will was competing, he had a very specific routine that worked well for him prior to competing.

Will came out of the wrestling and the football world. In his words, those sports were extremely primal. He learned that, for him, he needed to get riled up. As he got into CrossFit, he learned how his warm up needed to properly prepare him for the task at hand, so being fired up could look different depending on the event.

How Did Will Know If His Routine And Style Was Working For Him?

Will told me that he often learned more after he “came out of it.”  He meant that he needed to digest his competition mixed with his routine to see if that focus set him up well to succeed that day - or those days - or not.

A story that Will told was that he hurt his elbow a number of years ago in CrossFit. To heal his body, he began using OPEX’s CCP Coaching Principles to train more intelligently so that he could come back better than ever. However, when he went to a few early competitions, he recognized that he was much more docile than he’d been before, and he then noticed that he didn’t feel as prepared to “fight to the death.”  He had to use the coaching principles and mix it with how he was able to feel maximally able to express his fitness.  The answer, go back to getting riled up.

Will made mention that he felt that lack of connection to himself when he looked back. He didn’t feel like he was in the zone when he acted/competed “mindfully.”  He told the story of his biggest hit (tackle) in his football career was when he was so amped up that he didn’t even feel the hit. When he looked back on that, he knew he was in a flow state which made him more confident that that was “who he was.”

How Do You Improve Your Competition Routines Based On Who You Are?

According to Will, you must put yourself into competitive and challenging situations because those are the only moments that are stressful (both positively and negatively) to see how your preparation and competition style is/was working. That challenge must be there to continue to grow.

You must then reflect on what is working. This brings a big level of awareness to yourself as an athlete. Biasly, this is why coaches are so valuable to this process of improvement. A coach can help you see the realities of situations where perhaps you wouldn’t have thought to do so or couldn’t see reality because of the emotion that surrounded you at the time.

Will then went on to mention 2 types of athletes who he now coaches and how they react.

Will worked with this athlete leading into and then through the 2018 CrossFit Games. Will watched him struggle through the first event because he was nervous and wasn’t sure if he belonged on that field. But, later in the competition, his athlete really calmed down and found his style. Instead of Will trying to give him coaching cues after that event, he simply said “Hey man, that was outstanding, you were being you. What did you do to get there.”

That newfound awareness helped his athlete finish the weekend strongly and find true confidence and belief in himself.

Will has known Tommy for many years, so he really knows what Tommy needs to see/hear/feel as he moves through a competition. In this relationship, also partially because Tommy has so much experience now, Will knows that he needs to get in his face more because that is where Tommy “wakes up” and learns where he’s really at in any given moment.

However you break it down, everybody has their own unique style. And, the sooner you know and find that about yourself, the better you will find consistency when you implement the right routines and style in the warm up area and on the competition floor.

How Can You Improve Your Consistency of Acting Like Who You Are In A Competition?

Will thought about this for a second, and then he said “I’d ask them the question ‘What was the most fun you had in training leading up to the event?’”

The idea here is that you likely consciously or subconsciously did a routine leading into that training session that got you into the zone where you optimized your mindset and then your body to perform at its best.

How will you setup the right routine(s) to optimize your performance consistently?  It’s a huge separator between “normal” athletes and the creme de le creme

I hope you enjoyed this one.  Cheers! 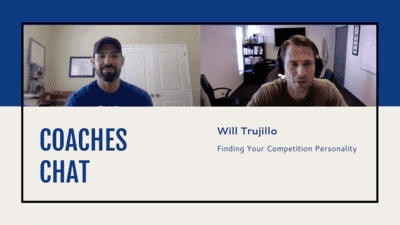