“Every person should experience their own Mitch-tathlon” - Will Trujillo

Will Trujllo and Mitch Davis have worked together as coach/client since 2017, and they’ve built an amazing level of trust in one another over that time. Our interview shed real light on that respect and enjoyment they have working with one another. This was a really fun interview to do, but it also left me thinking “Wow, everybody should be seeking people to help them find their own autonomy” as Mitch put it. Enjoy

As you get into this interview, you’ll notice that Mitch is a go getter. When he knows what he wants to go after, he goes after it with 100% heart and trust whether that be his time in the Marines, his coaching 14-18 year old kids/athletes, or his own training and learning. His passion for these quests runs deeply in his veins. The Mitch-tathlon is merely one of the outcomes of Mitch’s passion to experience deeper meaning and practice within his own fitness.

Mitch’s goals were a 3x bodyweight deadlift - a bit over 500# followed by a 90 minute half marathon.

The day Mitch did this he woke up early, hit his deadlift, grabbed a little bit of oatmeal, and then drove to the half marathon because he actually ran in a formal race!  It was all planned out!

Why do the Mitcht-athlon in the first place?

Mitch cares a lot about the athletes he trains, many of them being high school wrestlers in Pennsylvania - where wrestling is a big thing - but he was at odds with their beliefs around training.  They had the old school mentality of only wanting to train strength in the off season and conditioning only during their season. Mitch and their head coach knew they could be more prepared and have more success if they worked both sides of the spectrum intelligently all year, so Mitch decided to show them that he could go to the extreme ends of each spectrum - strength in the deadlift and endurance in the half marathon. He knew he could train properly for it to “not die” in his words and find success in his fitness.

Why did you start this training process with Will in the beginning?

Mitch’s attitude with all of this training is absolutely infectious. He lives a life where he doesn’t take himself too seriously, he laughs with those around him, and he enjoys learning and training experiences along the way.

Mitch has taken this attitude with him for as long as he can remember. He went into the Marines a bit late coming out of school - where he holds multiple Masters degrees - and while he was in the Marines he fractured his foot. Like so many other soldiers do, he fought through it without telling anybody until his initial training was finished. When his training ended, he went to the Marine doctor who told him he needed to rest it, and again, like so many soldiers do he went to the next phase of his training - infantry school - and kept brutalizing his foot.

Fast forward a bit further into his time in the Marines. He’d been working non-stop on his foot, so he developed big compensatory ways of moving. One day he knelt down while out in the field and he couldn’t even get back up. When he went to the docs again, they told him he was just getting old and that he’d just not be able to move/train/lift like he once did.

That attitude and process from the doctors really turned Mitch off, so he sought out a better place to learn. That led him to OPEX CCP where he honed his coaching skills, but it’s also where he found his coach, Will.

Mitch made the hilarious statement when he said “based on seeing Will for the first time when he had a massive fu manchu, I knew I’d either not like Will at all or we’d be bros.  3 years later, bros it is!

What has Mitch had to overcome to get back to healthy and fit?

“We weren’t working with much.” - Will Trujillo joking about Mitch

Will said that Mitch was much more of a fast endurance athlete for a lot of years. Mitch was a quality 800m runner where he “sprinted till he died,” and then he was a very enduring Marine. He developed a lot of tightness in his hips, pecs and back and he developed a lot of compensatory movements that continued to tighten him up.

Will took over a year to work on the biggest pieces that Mitch needed to work on in order for him to enjoy training and/or competing however he chose. They worked a lot of absolute strength, single leg stability and strength, structural balance, loosening Mitch up, and technique to prep Mitch to enjoy the craziness of things like Mitch-tathlon.  After that year, Will said that Mitch “had the keys to the (fitness) kingdom.”

Will also said of Mitch that Mitch is very aware of and patient with the time that it takes him to train and prepare for “the batshit ideas” that Mitch is interested in. If Mitch wants to do something off the wall, he’ll bring it up with Will, Will will design what it would take for Mitch to get there, and they would agree on the timeline and work necessary to achieve it healthily.

It’s another example of Mitch being willing to do what it takes to succeed and live to fight another day. He loves the learning process of all of the training and conversations he’s doing and having with Will, and he’s patient even during the times that he doesn’t outright love the specific training he needs to do in order to achieve his goals.

Mitch is ultimately after adaptability in his life so that he can do whatever he wants or needs to do in any situation be it throwing a ball with his son, demo’ing movements to his athletes, running in the hit, or any other of the million crazy things he’d enjoy doing.

“Mitch knows what he needs from his coach.”  Will made a big point of saying that because it helps both Mitch and Will dramatically. Too many clients don’t know what they need, so naturally they don’t get the right experience from that coach which costs them results. Will recommended that anybody wanting to make improvements in and out of the gym do a few things to figure out what they want/need from a coach:

“The biggest indicator of successful vs. unsuccessful is the kids who crave autonomy and ask the questions they need to ask in order to get there.” - Mitch Davis

What is the next Mitcht-athlon

Initially, Mitch is about to complete Murph which is:

**with a 20# weight vest throughout

That is coming up soon, but the bigger next test is the end of the Summer “competition” which will be 6 events - 2 per day - which Mitch will not know what they will be. We joked that we need to turn this from a 1 man competition to a 10 man (and woman) competition if the CrossFit Games don’t play out as expected because of the virus. What fun it would be!

Look for the live stream of this classic event haha!

I hope you enjoyed this one.  Cheers! 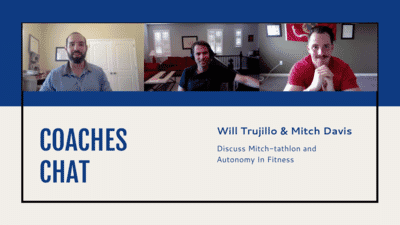