Sam Smith, for all of the notoriety he receives for working with big name CrossFit Athletes, is extremely introspective. He constantly investigates his thoughts, his actions, and the environment around him. He not only wants to grow, he wants to understand his coaching craft and the world at his fingertips.  It was this reason that struck up my curiosity. I wanted to better understand part of how Sam got to this mindful place in his life, so I asked him to talk about an experience in his formative – teen – years that both shaped his life as well as remains at the forefront of his coaching methodology today. What arose was a wonderful conversation about how Sam approaches the world.

What Was A Big Challenge That Sam Faced As A Teen?

Sam was greatly shaped by his experiences around the game of golf. From a young age, Sam knew that he was going to put the time and energy in to go as far as he was capable in the sport. At 9 years old, Sam showed consistent discipline that few around him would ever know. But it was when Sam moved into high school that he began to sense that he would face repelling forces in his life.

In high school, Sam knew he wanted to remain extremely disciplined with golf because he continued to see a great future there, but also because he loved the sheer mastery of ascending his talent and understanding of the game. He loved the process.

Opposing that discipline was social pressure to conform to the people and groups around him. As so many people felt in high school, your friends often wanted all of your time while not caring so much about what you wanted to be disciplined with outside of your friendship. Sam felt this in spades with many of his friends in high school. He learned early that he’d have to choose which “game” he wanted to play in order to shape his life the way he wanted it to evolve.

Sam made a really interesting comment that his eyes were “opened” as to what pressure felt like both on the surface as well as mentally/emotionally. We don’t even realize how much we’re pulled in directions opposite of what we perceive our goals to be. It’s not a bad thing that people wanted to spend time with Sam, but Sam knew that there was tension between that distracted time and his aspirations to succeed in golf.

How Did Sam Realize This Social Pressure Was Creating Tension?

I was impressed that Sam recognized this challenge in his life, so I asked him how he realized it.

Sam, ever so reflective, said that he really only felt tension in a dull way. He didn’t necessarily understand what the tension was, but he was aware enough to know that this tension was pulling him away from his goals. It was when his mind was into his ascent in golf that he was most alive in his life, so he wanted to put his time into that pursuit.

It wasn’t until years later, after having read hundreds of books and having seen hundreds of athletes going through the same challenges that Sam truly understood that difficulties that these social pressures created for him.

As you might suspect, just because Sam graduated high school didn’t mean that these social pressures stopped. If anything, they heightened when he want to college at USC (Southern California). He continued to ask himself those simple questions about what he wanted to do, but perhaps where Sam found the most clarity – and why he’s such an outstanding coach – is that he began to realize that his actions mixed with the amount of growing or waning tension helped him see where he really wanted to go.

If Sam was building toward something that was a high priority for him, he felt complete fluidity in his days/months/years. However, if his actions were too far away from his goals, he knew that he needed – and wanted – to adjust his daily life.

Where Sam truly felt his tension rise was after he graduated college. He went pro in golf, but after about a year of working his tail off, he sensed that this pursuit was no longer where his heart was. He noticed that his actions were shifting away from wanting to be at the course, the range, in tournaments, etc…and when he investigated why that may be the case, he realized that it was because he’d reached the end of his competitive career. Now, the more you get to know Sam, the more you realize that he has the uncanny ability to make big decisions, so when he realized his heart wasn’t into his golf ascent anymore, h simply decided to change his path.

How Can You Know If You’re On The Right Path?

I asked Sam how somebody can “know” when it’s time to change your life pathway vs recognize that true mastery takes time – in years – and staying on the path even when it’s challenging?

A goal is something that has potential of coming true. Unfortunately, there are too many people who think they have goals when in fact they are fantasies. A fantasy is something you want to happen, but there is no substantive proof that it will because nothing historically shows any probability of coming true. Sam mentioned that in an athletic arena, you need to see glimpses of success in both results as well as from your respected peers/coaches because those glimpses prove that you have the capacity for success. Of course those glimpses may be small in the beginning as you learn your new craft, but there must still be glimpses of athleticism, decision making, work ethic, etc…

Going back to Sam realizing that his time was coming to an end, when your actions don’t align with your goals, something is happening under the surface. It doesn’t mean you’re done, but it does mean you need to ask some questions about why your actions aren’t aligned with your goals. If you do that deep dive and you realize that you simply don’t want to continue to walk down that pathway, Sam notes that it’s a critical time to make decisions. You may decide that you want to stick with your sport (goal) because it may lead you to other opportunities, but you must recognize that when you make decisions knowing you are misaligned, you will have to deal with the mental/emotional toll that it’ll take. It’s not a bad thing to have an emotional toll, per say, but it will take a toll.

At Big Dawgs, we work with a myriad of athletes who are at varying stages of their development. We see people who are 100% aligned regardless of how “good” they are, and we see others who are in states of tension. It’s our job to work with them to find the best pathway, all in, to help them get to where they want to go. Sam has emerged as somebody who is brilliant at helping athletes find their highest state of alignment so that they can perform at their best toward the goals that they believe in.

What Can You Be Aware Of On Your Journey?

Sam boiled this down to a simple idea that you may have heard prior:

It’s worth the investigation because when you find true alignment, you’ll thoroughly enjoy the work you’re putting in each day while continuing to ascend your proverbial mountains.

Let us know how you do! 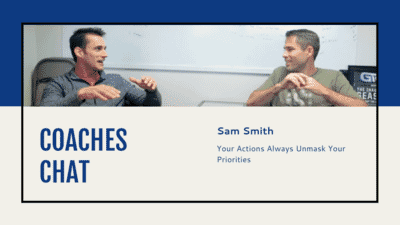