Coaches Sam Smith and Henry Torano have worked with hundreds of clients in fitness and health 1:1. They have seen many patterns that have led their clients to success as well as failure. I wanted to learn from them about how they and their clients perceive the meaning of what’s happening in their lives. With so many things happening directly to us as well around us in the world, each and every one of us decides - sometimes consciously and sometimes unconsciously - what those things mean to us. It’s from that meaning that we take action based on the outcomes we want to achieve and feel.

The more conscious we can be about how things affect us and what meaning we place onto them, the better we’ll be able to understand what drives us, why we take positive/negative actions, and how we can move forward most effectively given our unique talents and view of the world.

How does somebody go from taking in information to taking action on it?

Henry opened up the conversation by answering this question with “there are two parts to this: the facts, and how you feel about those facts that come in. Those are people’s “filters.”  People have certain hardwiring as well as certain experiences that create their own filters of the world, and it’s through those filters that we assign the meaning we “see” in things to ourselves.

Everybody sees the world slightly - or massively - differently than everybody else, and it’s critical that we recognize that base facts.

How do you make your filters more conscious to you?

Sam gave us an example here by saying “Imagine somebody who has a back flare up once every 4 months at similar times.” Sam isn’t going to the client and blasting them with “It’s this problem and that problem….” he’s going to the client and asking them questions in order for his client to recognize for themselves that something may be going on, that a pattern may be emerging which causes them pain. When his client can become aware of these instances, they can become more autonomous as well as more prepared to overcome their natural tendency patterns to progress faster and more consistently.

How many people are aware of their own issues?

Both Henry and Sam agreed that very few people, as a percentage, are highly aware of the underlying issues that cause them to move forward/backwards.

Henry noted that a lot of people simply don’t want to go down the awareness rabbit hole because they think they don’t have time, or they think that it’s only going to happen once - even if it’s happened multiple or numerous times.

People often ask themselves destructive questions which lead them to focus on symptoms which exacerbate the pain of whatever the underlying issue is. It’s critically important to ask more questions about what is leading to and underlying the symptom so that you can focus on improving that as opposed to simply focusing on “what hurts.”

What gets in people’s way when these situations arise?

Some of the big pieces that often get in people’s way when it comes to deeper awareness and consciousness of the underlying issues are:

The list can go on, but the key is to keep asking yourself questions about what is going on and why that is going on until you get to the root issue causing the distress (this can also be done when you’re having success so that you can duplicate that success).

Henry made the comparison of adversity in the context of COVID-19. Henry has worked a lot with his clients to help them go from “COVID-19 is being done to me” to “I’m going to control what I can control to come out of COVID-19 a better _____.”

How do you take action before it’s the only choice you have left?

Sam said he likes to help his clients get extremely clear about what their goal(s) is/are, and then he builds the foundational support to support those goals. The more clarity his clients have, the stronger their foundation is which then allows them to build to a higher peak of success. This really helps people build resiliency and antifragility which gives people more buffer before they break down.

Some people learn this very quickly whereas others do not. If you are less aware, that doesn’t mean that you’ll be “worse,” but it may mean that you’ll need more support to help you identify those patterns that continue to come up in your life. Henry likes to ask the difficult questions that perhaps his clients don’t want to or are afraid to ask themselves. That uncovers these challenges which helps his clients move forward even when they hadn’t shown awareness initially.

A great place to start is to ask yourself how well you see and then understand the patterns that you show in your life, good or bad. If you can identify those patterns, you can give yourself a better chance of learning how to make slight forward movement to the areas of “bad habits” as well as to optimize the areas of “good habits.” That awareness will give you the foundation that both Henry and Sam know will allow you to succeed in a larger way. 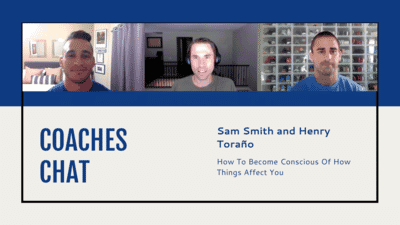