Mike McElroy and Will Nobles, on the surface, may appear to be a bit odd couple’y - coach to client wise - but their differences have made them brilliant fits to work together to ensure Will is consistently moving forward in and out of the gym.

In this conversation we spoke a lot about where Will is coming from, how he uses his coaching with Mike to benefit his own coaching with his clients, Will’s love of exploring his own fitness in non-competitive settings, and how Will’s learning to deal with the changing landscape of a COVID-19 social isolating landscape. Enjoy!

Who Is Will Nobles?

Will has been a more recreational athlete his whole life, but he’s learned that what he really loves is investigating himself through those sports. When he was old enough, he joined the Marines, and since then he’s continued to investigate his own health and fitness through CrossFit, Bodybuilding, and Cycling.

As Will learned more about fitness and training, he decided he wanted to become a coach, so he enrolled in the OPEX CCP Program which is where he found his coach, Mike McElroy. Will knew he wanted to continue his exploration of fitness, and this was the perfect opportunity to learn for himself as well as for his clients.

How has Will’s training influenced his interests and vice versa?

Will loves to dig into his own training, and he loves routine, so when he gets into some part of training, he really gets into it. At one point in the conversation, Mike noted that Will is almost always 100% compliance in every part of workouts. He doesn’t miss any pieces because he loves both the process as well as the learning he gets from training.

Will’s fitness ascent after the Marines was CrossFit → Bodybuilding → Cycling, and he found a great love for cycling because he got to learn training, enjoy tremendous rhythm and progression - particularly in the length of time on the bike - as well as explore the city of Phoenix on his bike.

Will loves to look and feel good, but like so many, he also loves to challenge himself in different ways. All of Will’s endeavours have allowed him to explore each of these aspects of himself which has lead him to grow outside of the gym

Mike describes Will as an analyst who loves to put together a broad picture of how health/fitness fits together as well as how it influences and changes him.

Mike loves to ask Will questions because he knows Will will think a lot about the answers, and he also knows that Will will take those answers directly into his training with a high level of consistency which Mike knows will lead to Wills growth.

Will speaks to Mike often about how his program works because that is a big priority for Will being that he’s a coach. When I asked Will if he likes “putting the puzzle together” or his daily training more, he struggled to answer because he loves them both. It’s clear to me that Will has found an outstanding outlet in fitness and coaching with Mike where he’s truly expressing himself in a way that will lead to fulfillment and longevity!

How has COVID-19 disrupted Will’s life?

Initially, Will thought that he was good to go when things locked down. There was a bit of novelty about the virus, he knew he had Mike and would continue training and learning - albeit from home - and he knew he would still have puzzle pieces to put together.

However, as the weeks went on, Will found that his rhythm felt severely disrupted. Being an analytical mind, he recognized that the little things were really bugging him. He didn’t have the same schedule of work, working out, learning, etc...he didn’t drive into the gym/office, his macros were off because his training was different, and a number of other small things just weren’t rhythmic anymore.

What does an analyst do when their “system” isn’t perfect?  They try to make it perfect. Will’s wife said Will’s spirit animal was a domestic house cat because of how he adapts to change haha. Initially, change scares Will, but once he settles in he is rock solid.  COVID-19 was an example of a fast change that stung Will initially.

Will was feeling like he had a new puzzle, but he didn’t have any of the perimeter - his daily rhythm - built so he couldn’t “see” his future.  What really frustrated Will was his food portions. He knew he could go to hand size portioning, but he was very worried about not being perfect.

Mike noticed that Will’s compliance in that time was almost 0% when he’s almost always 100%.  Mike got on a call with Will to check in on him, and it was in that moment that Mike asked Will a life changing question:

“What do you think would happen if you weren’t perfect with your portion sizes?” - Mike McElroy asking Will Nobles

Mike helped Will put his overthinking into more digestible portions so that Will could wrap his mind around things he could tangibly see and control which calmed him down and allowed him to re-begin his ascent forward - and it only cost him a few days of progress all in!  Mike noted that it’s taken him years to learn where and when to ask these great questions; at one time in his coaching career, Mike would just tell somebody “calm down,” but through years of refining what works the best, Mike has learned the art and sciences of asking these types of great questions. They helped Will in a big way in this instance.

Mike helped Will relearn that consistency trumps perfection 100 times out of 100. Will is now a lot more calm and feeling great about where he’s going!

We look forward to the next great - and analytical - endeavour for Will and Mike! 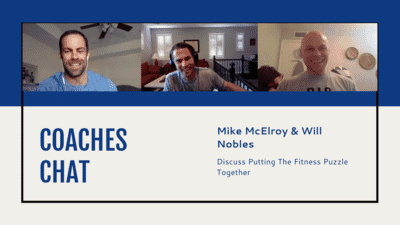