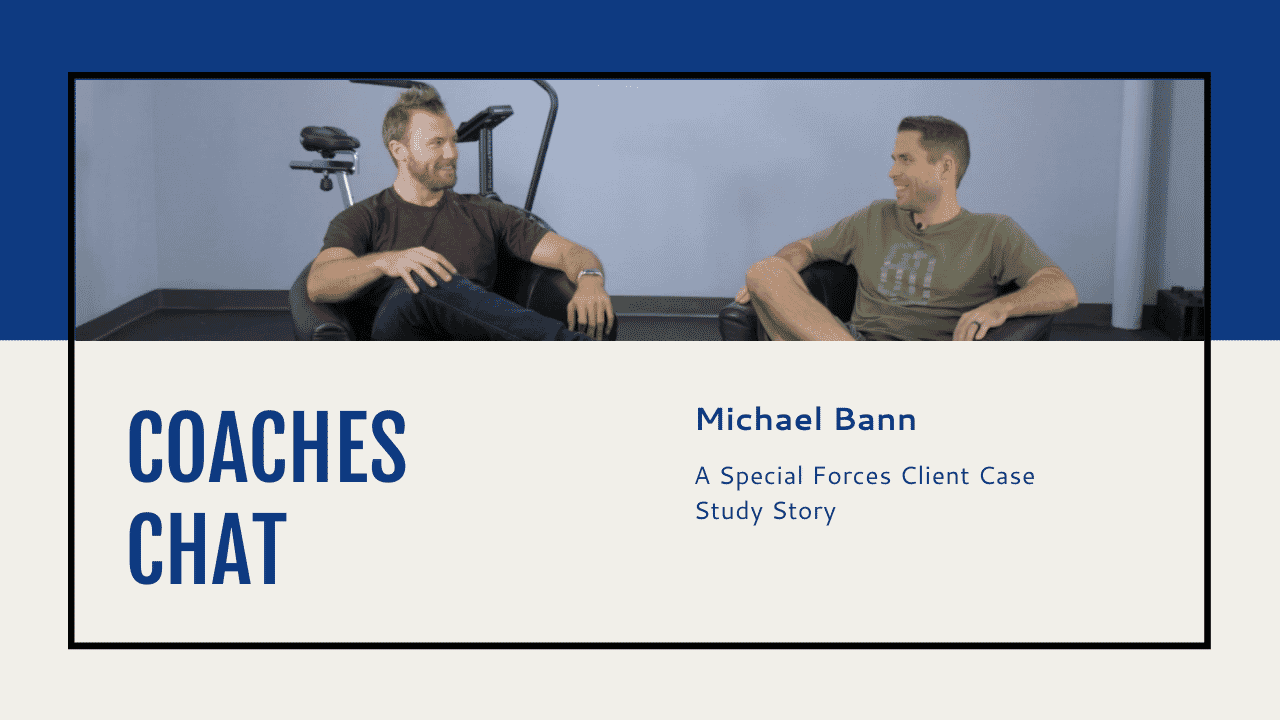 Michael Bann  and I often discuss the successes and challenges he’s seen with some of his clients because he often has complex client puzzles to solve. Michael often works with Military Special Forces clients as they want to prepare for, go through, and thrive after Selection, the Qualification Course, and then multiple deployments into hostile parts of the world.

In this story, we’ll mask the client’s name by calling him SF. Initially, Michael sits down with every one of his client - generally in a zoom video conference when he is remote with them.

Michael laid out what information he learned from his initial conversation with SF:

Hearing those things, Michael always then goes back to his principles of what he needs to focus on outside of just fitness with every client:

Some of the fitness-related components that Michael needed to prioritize with SF because of the end goal of graduating through both Selection and the Qualification Course were:

Some of the initial assessment results that Michael noticed on SF were:

SF is not a very large person so rucking would be a bit harder just because the 100lb ruck was a high percentage of SF’s body weight. To dig in further, Michael looked at

Something that was also consistent was that SF was also initially plagued by little tweaks and aches and pains. Even when Michael had SF dialed in with a program, these little tweaks continued to occur.

Michael Decided It Was Time To Get Under The Hood with SF?

When SF couldn’t shake the aches and pains, Michael decided to look at some blood work to see what may be holding SF back. When the blood work came back, some of the notable pieces were:

If Michael couldn’t fix the foundational pieces, he wouldn’t be able to stack a big peak of fitness - to pass Selection and the Qualification Course - on top of it.

Michael knew he’d need to go after SF’s issues systematically, so Michael put this protocol into play - please note that this isn’t an exact by any means; this is merely to help you gauge what was necessary to help fix up SF:

As those pieces were cleaned up, SF began to recover much better between workouts. With improved recovery, Michael was able to stack additional workouts/fitness on top of what SF was already doing. As Michael could stack fitness on top of the base, SF’s fitness KPI’s - key performance indicators - improved significantly leading into Selection.

SF Had To Go Through Selection & Qualification Course

SF went into Selection - this is what most laymen see as the intensely rigorous portion of earning a spot on a Special Operations Team - feeling great. He was able to move through Selection without any large issues which allowed him to move into his Qualification Course - this is where soldiers learn their specific function within their team.

Michael monitored SF through this process where he could, and when SF passed Michael told him to take a week off to relax his body and mind. When SF went to Qualification school, Michael prepared him very specifically for the specific function that SF was going to do (please note that Michael wanted to protect the anonymity of SF, so we did not speak about what function SF went for).

Michael is a big believer in resilience and balance. He wanted to make sure SF was extremely ready for the rigors, both mentally and physically, to do his exact job he was selected to do. At this point, SF didn’t need a bigger back squat per say, he needed to recover very quickly, make quick smart decisions, and execute with extreme precision.  Depending on where SF needs work, often times outside of fitness - going back to the 5 bullets needed prior to building fitness - Michael makes sure to keep SF and all of his soldiers rock solid so that they execute successfully