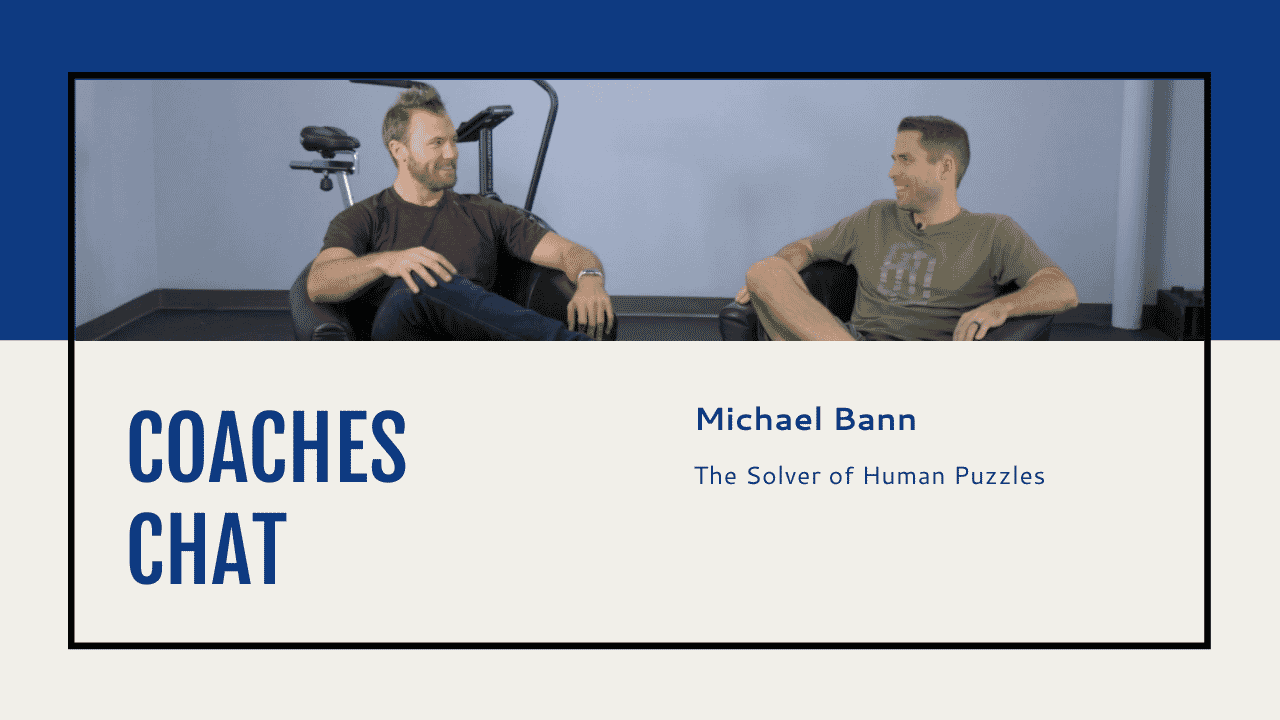 Coaches Chat - Michael Bann Is The Solver of Human Puzzles

Coaches Chat - Michael Bann Is The Solver of Human Puzzles

So many people are curious how Michael Bann is so capable of wrapping his head around so many complex topics while simultaneously being able to explain those complex topics in simple enough ways for his clients and coaching colleagues to understand. To dig into how Michael learned these skills, we needed to go way back in Michael’s story, so that’s what we did!

Michael loves the idea of figuring out systems and humans. Michael noted that there is nothing more complex in this world than what happens inside of human beings; it’s that complexity that Michael loves today, but it’s also what he’s loved since he was 8 years old.

At 8 years old, Michael read his first medical journal while he and his dad were in an airport stuck between flights. Because he couldn’t understand enough of what was written in the journal, Michael felt extremely frustrated, perhaps more so than most people would have felt. He made a decision that day, at 8 years old, that he was going to be somebody who understood everything in those journals.

As Michael was learning this new language, he recognized that there were puzzles everywhere that he wanted to solve, but Michael wanted to learn how to solve the system, not just the individual puzzle.

At 15 years old, Michael found the weight room and quickly recognized that humans were the puzzle that he’d dedicate his life to solve. He demanded that he learn the knowledge and spend the time experiencing fitness because he noticed instantly that everybody reacted very differently than others even if they were doing the same thing.

Michael didn’t know where he wanted to go with fitness, per say, until he hurt his knee doing a fairly light front squat. He simply couldn’t understand why he, who had perfect scores on his movement assessments, had pain while other people who appeared broken felt fine every day. That question lead him into doing 12,000+ assessments, coaching thousands of classes (CrossFit mainly) and personal training clients, and growing his knowledge about how humans function inside and out.

Because Michael kept seeing people who were outliers as they related to movement assessments, he saw it as a puzzle piece that simply didn’t fit or make sense. He knew he needed to continue digging more deeply.

Michael Bann Learns To Learn and Ask Questions In School

To better understand his obsession of fitness, movement, health, and humans, Michael took the time to go to college and then graduate school so that he could better learn how to learn and decipher more complex information. It was in this environment where Michael really dug more into scientific studies as well as refined his own coaching craft based on his newfound knowledge.

While Michael was in school, he also continued learning through outside courses, instructors, doctors, and clients. It was here where Michael really began to understand how human’s consciousness and behaviors is what makes humans infinitely complex...so he dug in!

Michael immediately began to refine his coaching craft to take into account his client’s emotions, their lifestyles, and how they perceived things around them. It was here that Michael really saw a spike in results. When Michael combined this new found awareness around behaviors and perceptions with his strengthening ability to see the entire picture through both their fitness assessments as well as their internal assessments - think blood work, etc… - his clients were much more capable of fixing their own challenges because their bodies didn’t have so many obstacles in the way. As Michael helped “clean them up,” their bodies became immediately more capable of performance.  Michael was learning which pieces needed to be moved based on the very complex human being in front of him. Things began making more sense.

If you reread this article with the context that Michael isn’t just curious about the pieces of the puzzle fitting together, he was obsessed about the pieces fitting. His mind runs at a speed few will ever understand, and to Michael’s credit he’s zoned that speed into the puzzle that fascinates him.

What’s Next For Michael Bann

Michael will live his life as a few things

With that said, Michael is likely going to take on medical school and then a PHD so that he can do very deep research into the fields of performance that have yet to be researched. But, even over the next 50 years, Michael is and will always remain a performance coach because what better way could there be to learn the most complex human puzzle than to continuously see how they work in practice, not just in theory

What a fun story it will be to watch!