Michael and I have wonderful conversations where he unloads really helpful information onto me, and when he chats about first responders it’s very clear that more people need to hear him.

One of the really interesting topics Michael has discussed with me in the past was about what he looks for, key performance indicator (KPI) wise, with his first responders. Those KPI’s break down mainly into fitness and nutrition where nutrition is inclusive of behaviors/lifestyle choices. When you combine those KPI’s, Michael is able to help his first responders have more success at work but also be much healthier and happier today and over the many years they choose to remain in their field.

The more I heard about this from Michael, the more I knew this needed to be public-facing, so we decided to get this great conversation on tape for you!

What Is A First Responder?

A first responder would be part of the group responsible for being first to the scene in an emergency situation. That emergency can take many different forms, and a first responder needs to be prepared both physically and mentally to effectively deal with and solve those difficult scenarios.

Essentially, first responders must be comprehensively capable physically, and they must also be able to maintain mental acuity under highly stressful situations.

What Are Fitness Key Performance Indicators for First Responders?

Broadly, fitness for first responders falls into these buckets:

What Are Some Conditioning Tests For First Responders?

Michael likes to look at tests such as:

What Do Scores Mean On First Responder Fitness Tests

While we’d love to tell you that a specific time = a specific outcome, that isn’t accurate to say. Michael looks for their scores to fall within certain ranges, but then he asks them a lot of questions about what went well and what didn’t. Perhaps somebody’s hamstrings blew up on a 2 mile run. Michael wants to know those things so that he can most effectively build a training, nutrition, and lifestyle plan to make sure he fixes those hamstrings. As he fixes the broad system - more on this in the nutrition section - as well as he fixes the most important relevant pieces of their fitness, the more successful they will be in their role.

Michael mentioned that he tests these specific tests not only because they have transferable skills to first responder’s roles, but he also has a significant amount of data to support where the ranges of scores “should” be for first responders to do their roles well.  Michael made sure to

say that not every person falls into these ranges, but he does have certain ranges where if his clients fall outside of the range he knows he has work to do with them right away. An example of this would be a firefighter who runs a 5 mile in over 47 minutes.

Something I also found interesting as it relates to people’s scores on these tests is that Michael wants/needs to build a big base of aerobic work because without that big wide base, his first responders can’t build a big peak of intensity on top of it. He said that something like a 5 mile run, if he sees somebody who can run it in 35 or fewer minutes, is a great indicator of that capacity because it shows Michael that they can recover. Recovery is the name of the game as a first responder because their jobs have a lot of start and stop in intense and mentally stressful scenarios. A larger capacity allows a first responder to better recover which allows them to “peak” into these intense scenarios more successfully.

What Are The Best Fitness Tests For First Responders?

Michael said for the people whom he’s not working with yet, he would have them do 6 tests:

Those tests would give a first responder great awareness about where they are lacking and how to begin to improve their fitness. Michael loves other tests such as rowing, but I pushed him to put the least number in so that first responders would actually test themselves. Michael noted that he would be able to layout a quality 12-month training program for a client based on these 6 data points only.

**Note - If you do these tests, you must break them up over a number of days to properly recover. Perhaps you could do the whole powerlifting mock meet + 1200m day 1, the 2 mile day 3, and the 5 mile day 5. We aren’t saying this is a hard and fast rule, just a suggestion to allow your body to properly recover for proper scores to shine through.

What Should Nutrition Key Performance Indicators Help A First Responder Understand About Their Health and Fitness?

Michael breaks nutrition down into objective and subjective buckets.

Objective nutrition would be maintaining proper energy and mental acuity during and after eating and ultimately between meals.

Subjective nutrition would be making sure that the food you’re eating actually allows you to feel happy about it. Michael gave the example of somebody who is a foodie - they may not be the best fit for an extremely limited bodybuilding diet because they just don’t get fulfillment from it.

What Are The Best Key Performance Indicators From Nutrition For First Responders?

**Note that Michael does not initially look at lab work on most clients. He looks at fitness + lifestyle habits + the foods they are eating - as well as a full intake form and history - and he sets up their initial training/food/lifestyle plan from that. If they are progressing well, he’ll continue to add to it, but if something doesn’t work like Michael expected, then he’ll drive some additional lab testing into his client’s assessment so that he can get to the bottom of what’s costing that first responder health and resiliency.

When Michael does testing, Michael broke down the best KPI’s for nutrition for first responders into 5 buckets:

Michael wants to look at the numbers here to gauge a map of what’s more deeply “in the way” of his first responder’s health and resilience, and then he’ll design the comprehensive program in a way that improves those scores which would then translate into better fitness testing and ultimately into better on the job results.

What Should First Responders Look For To Show Them If They Are Unhealthy?

Michael has had countless clients who have been “living with 20 pound backpacks on” for many years of their life until Michael works with them on the lifestyle and nutrition side. Many people don’t even realize that they are firing on all cylinders, so when Michael helps clean them up they feel things they didn’t even know they could feel.

When Michael puts these protocols into place, he often sees his first responders noticeably feel better within 72 hours.

Some of those feelings that some people don’t even chalk up to problems are:

As Michael helps his first responders add awareness about how they feel, they almost immediately want to continue making the upgrades to their fitness, nutrition and lifestyle because they never want to lose that state of feeling great.

What Nutrition And Lifestyle Changes Should First Responders Implement?

Some of the lifestyle habits that Michael always has his first responders put into place are:

Michael ended the conversation by saying that he doesn’t want to see first responders with “check engine lights” on and not get those things checked. Because of the disruption to their rhythm, the challenge the role puts onto their bodies, and the mental stress it puts people through, first responders have a challenging path ahead of them to remain healthy.  If you or somebody you know would benefit from Michael’s support, you can reach him through his Instagram DM’s or [email protected] (he prefers Instagram!)

For those of you who want to geek out a bit on some more specifics, check out from apx minute 24 on for examples of how Michael looks at progression. 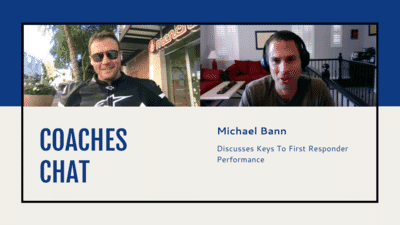