This is part 2 of the two part series where Big Dawgs Coach, Henry Torano was kind enough to share some of his most challenging fitness moments with us so that we can learn from them and continue to uplevel ourselves and those around us.

The first part of the series saw Henry discuss his foray into triathlon and how brutal he made it on himself by trying to fast track his training for an Ironman. The key takeaway was that Henry needed to take the proper amount of time to train as well as find the right people to help him understand how to train more intelligently to achieve the lofty goals he had in the sport. That article and video are HERE.

In this article/video, Henry discusses the difficulties he faced coming to terms leaving the competitive CrossFit world. We hope you enjoy it

What is a really difficult moment that you faced in fitness?

Henry has been a competitor for his entire life.  For most of those years he’s competed as an athlete. The crossroads came about 3 years ago - 2016 - when Henry recognized that he was progressing into the next phase of his life, coaching competitively. Henry realized that his goals were aligning much greater as a coach than continuing on as an athlete, and that is a very challenging realization for any athlete to have.

Additionally, Henry and his wife suddenly realized that they were going to have another baby, almost 20 years removed from Henry’s first.

The combination of that large athletic crossroads along with the massive life change forced Henry to “go dark” in terms of digging into his emotions to understand where he was, where  he wanted to go, and what sacrifices it would take in order for him to get there.

Henry was all of a sudden trying to figure out how training would look and feel to him. For the first time in his life he wasn’t enjoying every training session…

It took him some time to find his sweet spot with both training and life. Henry found that he was able to enjoy and help with his wife’s pregnancy more which began to change his perspective about where fitness, training, and competition needed to sit within his daily life.  And, as his perspective shifted, he found many new aspects of training that he both enjoyed and found great focus in. Certain small things within his training became quite important such as the quality of each rep, set, and interval. He found much more joy in his attention to those details, dare I say to the perfection of those details.

It was through that progression and enjoyment of those details that Henry found a fully reinvigorated sense of purpose for how training would continue to impact his life without fully commanding it.

While Henry is now dialed back into training, it’s his training that has shifted. Henry used to picture those who he intended to punish in competition, but now he was purposely choosing to focus on himself and the intention that he has for that workout as well as that progression of training. Henry also said his training has changed in that he no longer goes into the death zone of training meaning that he doesn’t do much training that forces him into a lactic (burning) bath. It’s simply because that’s not what’s going to keep him healthy or get him to his new found set of goals which exist in and out of the gym

It was through that progression and enjoyment of those details that Henry found a fully reinvigorated sense of purpose for how training would continue to impact his life without fully commanding it.

“It’s not exactly clear, but it’s about holding onto fitness for as long as possible.” - Henry Torano

Henry made mention of how he surprises himself from time to time by getting better in areas he didn’t expect to. One of those places is a 10 minute Assault Bike test - for max calories. Henry intends to progress where its appropriate for him. You can hear it in his voice very clearly; Henry still competes with himself, but it’s a different and more mature understanding of himself given his stage in life and training.

Henry said something that really connected with me toward the end of our conversation.

Henry said, “I love training now even if I don’t love every movement or session.”

What would you tell your clients to help them transition from competitor to “different” competitor?

Henry works with many clients who are making this transition in their life. He always asks them the question “Are you going to stop doing fitness entirely?”

When the person responds back that they aren’t going to stop, their perception of what fitness is and can be begins to change - it doesn’t shift entirely immediately, though. It’s that perception shift that allows them to approach training consistently which is the absolute key. As they begin to see that fitness can be “breakfast,” they realize that there is a lifetime’s worth of enjoyment and different levels of progress that they can enjoy as they move toward fitness as a resistant. By resistant, we mean that you may no long place more highly in the Open or Triathlon, but you are still enjoying those activities and you’re still working to make progress where progress is appropriate for your long term goals.

What a wonderful journey of maturation it can be, but it takes time and some ups and downs for most athletes to move from being in the “arena” every day to being “by themselves.”  We can tell you from both of our experiences as well as from seeing it with hundreds if not thousands of clients over the years that that transition and maturation is well worth the effort of understanding yourself because you can find tons of fulfillment in the new phase of your life 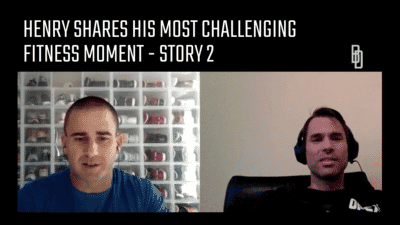