Big Dawgs Coach, Henry Toraño, and I had the pleasure of sitting down with Henry’s client, Laura Thompson. Laura is in the CrossFit Games Masters Division Age 45-49 division. She finished 37th in the world in the online qualifier, so Laura is a competitor. However, just like so many others, she finds herself in a very uncertain, very chaotic, and very stressful situation for training and progressing. We wanted to bring Laura into our conversation because so many people are in similar situations to her - even if they didn’t compete in fitness haha - and her thoughts will provide a lot of helpful ideas for them to think about.

Who Is Laura Thompson, The Person and Athlete?

Laura is a 44 year old mother of 3 who lives in Boston, MA in the United States. She works from home where she’s teamed with Isagenix to support people’s nutritional needs around the world.  As part of her desire to help others, she has also been a fitness competitor in CrossFit for a number of years. Like so many others, she initially trained to the max for a while, and like those so many she got better initially but she plateaued and struggled to fully recover after the initial honeymoon period.

Something that Laura pointed out toward the middle/end of the conversation, though, was that she didn’t want to believe that she didn’t have to go all out every day. She really believed she had to suffer every day in order to continue to get better. That, in a nutshell, has cost many athletes long term progress and even safety in some cases because they don’t allow themselves to recover properly between workouts.  Especially as Laura approaches 40 years old, she is learning what long term progression really is as well as what she specifically needs additionally to training - think nutrition, lifestyle, etc…

Laura mentioned how crazy her household is right now because she has 3 kids who are being homeschooled because of COVID-19, Laura is still working, and she’s still trying to get training in. She told us that she’s working all the time which is something extremely common that we’re hearing from people.

How Has Laura’s Perspective Shifted With the Outbreak Of COVID-19?

Laura mentioned very early in our conversation that she’d begun to adjust her expectations well prior to the virus becoming a pandemic. She said “I am trying to compete at the highest level Im capable of.” With the CrossFit Games Masters fields being cut down to a very small number, while Laura is a heck of an athlete, the likelihood of her making it to Wisconsin is slim - not that she doesn’t want to make it!

She’s adjusted her expectations to train for a few big events such as Wodapalooza each year because she knows the best athletes in the world will still be there and she wants to lace up her shoes and compete with them.

During the outbreak, Laura has found a few wonderful pieces that lit her face up in a beautiful way.

She’s found a new level of true enjoyment in her training because she doesn’t feel the bombardment of an event to prepare for every “5 minutes.”

She’s also lost all stress about allowing herself to fully recover from some aches and pains. Without a specific event on the horizon, her and Henry are thinking longer term, and that focus now better allows Laura to fully recover which may end up allowing Laura to compete for longer than she originally expected.

How Is Henry Structuring Laura’s Training And Lifestyle Within the Pandemic?

Henry came out of the gates saying that he and Laura speak often and ongoing about where she’s going in and out of the gym, so they didn’t need to 180 (degrees) their conversations when the pandemic broke out. Laura was fresh off of the CrossFit Games qualifier when this outbreak began in the US, so she was already going to get a nice little break to heal up for the upcoming season.

Now that the CrossFit events season is completely unknown, they have shifted their focus into full recovery as well as maintaining rhythm and sanity of the new environment Laura finds herself in.

Henry said “one things goes with another.”  He means that he’s working with Laura on each of the unique buckets of her fitness life - training, food, lifestyle, stress, etc…

He’s really working on details with Laura, and he zoned in on how aware Laura is during her training. He’s working with her to recognize things such as “my quads blew up at this point in a row workout…”

Henry also mentioned that Laura must think more and more about the age range that she’s in because recovery takes longer, life gets more complex - kids, job(s), economics, etc

What Was Laura Worried About When the Outbreak Hit?

Like so many fitness fanatics who don’t own gyms, Laura was worried about her training. She worried about having enough equipment or finding the space/time to train like she was used to when she didn’t have to corral her kids all day everyday.

Since she got through the initial few days, she’s found enough equipment, and she’s found a wonderful new perspective on her days and her training. She’s enjoying the intensity of her workouts being less aggressive than they were. With the big uptick in stress because of the virus, having kids home 24/7, etc she’s now finding fitness to be her outlet that relieves stress, and she’s matured her fitness so well that she knows that to relieve stress she has to lower the “craziness” of her training so that her body doesn’t doubly stress itself out

What Is Laura’s Focus Now And Coming Out Of The Outbreak?

Laura is a “find goal, achieve goal” mind. She loves to have things to work toward. So, even now, she is working toward Wodapalooza even if that is in her pacing/aerobic work or in her mindset.

Henry is the one thinking about all of the intricate details of timing, peaking, stressing the body in terms of training, so he’s waiting to hear about the exact season/event timing as well as what stressors continue to remain forefront in Laura’s life.  Henry is making sure that when the season timing is announced the he has Laura in the absolute best position to then be able to peak Laura for the event(s) that she wants to compete at her best in.

What Has Henry Helped Laura The Most With?

Laura has built tremendous trust in Henry over their time together. Laura  has been told that training shouldn’t be hard all of the time, but she simply didn’t believe it until she felt and “saw” it while working with Henry. It is a consistent conversation and awareness build that helped Laura to see this, but now that she’s felt it and has seen the results in her competition scores, she’ll never go back.

It’s a wonderful coach:client relationship that produced an outstanding result this year, and it’s continuing to produce results in and out of the gym as they go along whether there is a lock down or whether we’re opened all of the way back up!

Laura finished the conversation by saying she’s most excited to keep having fun through all of this. What a great send off that was... 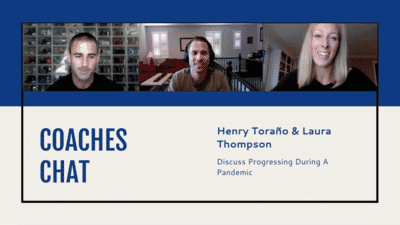