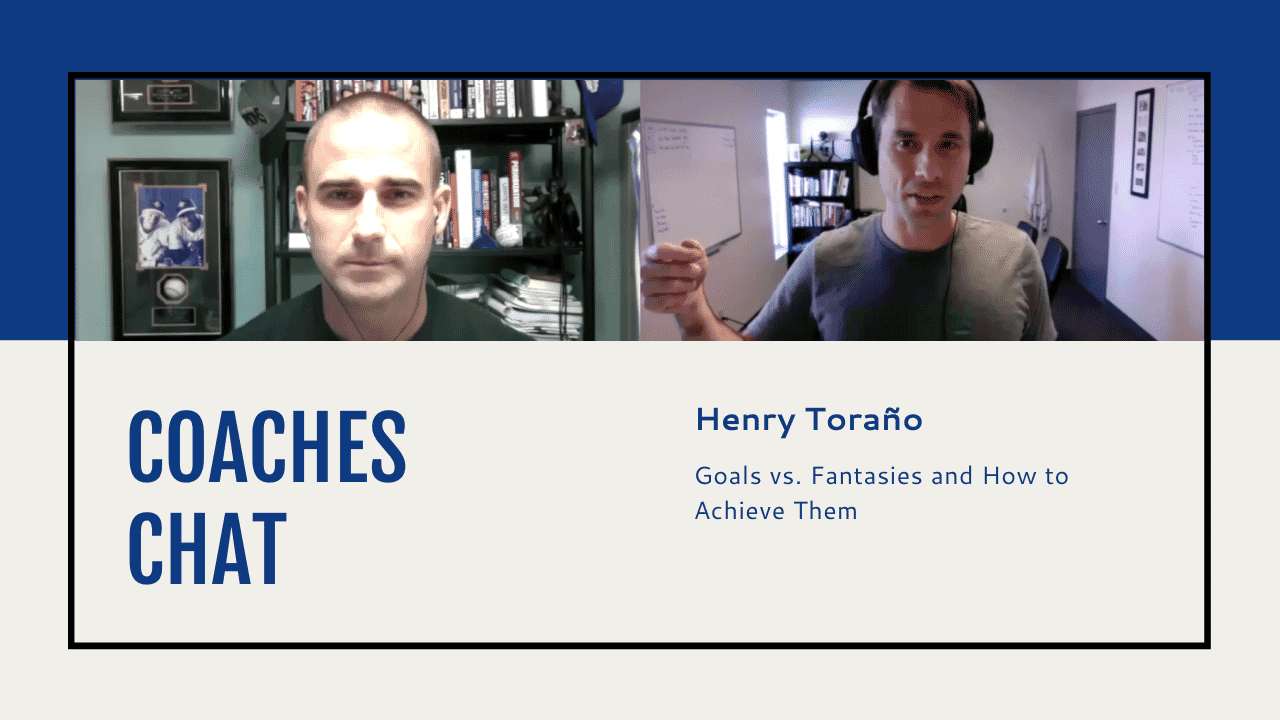 Coaches Chat - Henry Torano - Goals vs. Fantasies and How to Achieve Them

Coaches Chat - Henry Torano - Goals vs. Fantasies and How to Achieve Them

Henry Torano is a master of helping people see what they are doing and then helping them sort out why they may be doing it. When I chatted with him about goals vs. fantasies around the New Year, he schooled me in helping people gain awareness on the decisions they are making so that those people learn how to improve much more consistently.

What is a Goal vs what is a Fantasy?

Goals are those things that we wish to achieve that are realistic to achieve. Some people use a SMART goal setting framework where goals must be

Goals often, though, get confused with fantasies which have no anchors in reality.

Henry noted that a big reason why people set fantasies is because they actually feel less pressure to achieve them because other people already don’t think they will succeed. When somebody sets a realistic goal and fails to achieve it, they and potentially others, think less of themselves, or at least they think that will be the outcome, so they don’t set the real intention in the first place...all to be less accountable.

Wherever you fall on this spectrum, one of the biggest keys that Henry spoke about was that you need to be aware of what sort of goals you’re setting. It’s through that awareness of yourself that you will learn and grow to not just set better goals but also to achieve them more consistently.

Examples of Goals vs. Fantasies

Let’s take Bill. Bill is a 45 year old executive with 4 children who works 60 hours per week, coaches 2 of his kid’s teams, and has never worked out more than 2 days per week in his entire life. He’s 30 pounds overweight, currently not working out because he’s so busy, eats two meals per day out of the house, and doesn’t seem to have any motivation.

“I will lose 30 pounds in 1 year while training 2 days per week and trying to get a third day in 1 to 2 times per month. I’ll limit eating out to 1 meal per day.”

“I will lose 5 pounds in month 1 while training 1+ days per week and eating between 1-2 meals out per day.”

I am clearly simplifying the example for example’s sake, but you can see how there is focus, clarity, simplicity, and realism to the example. Let’s now turn to a fantasy for bill

Can Bill do this? Perhaps, but it’s entirely outside of what is realistic for him. Because he’s not doing anything remotely like what his “goal” is, it’s very unrealistic for him to implement all of this, and expecting success is much more akin to a fantasy.

We can do this with many other examples to articulate the point:

The list can go on. The reason it’s so important to see the differences on paper is that we are often blind to our own fantasies in real life. In certain moments, we want things so badly that we set these big audacious “goals” in an effort to change our stars. Unfortunately, we are setting ourselves up for failure.

Henry is so good at helping his clients see when they are setting quality goals vs not. In our earlier example, Bill’s, case, Henry will often ask people questions such as

“What are you doing already to help you lose weight?”

“Well nothing, that’s why I want to make this my goal.”

The problem is that goals - ie fantasies - have never showed any signs of coming true so to think that you are going to dramatically change your behavior and maintain those habits has been shown to be highly unlikely. This isn’t me trying to challenge you into being that person who is the exception to the rule. No, my goal - ie realistic haha - is to help you set goals which are far more likely to come true so that you can then compound additional goals on top of them.

Something Henry and I discussed was how goals and long-term success is never straight up. There are always peaks and troughs, but you’re trying to set your long term trend in a very lower left to upper right (picturing a line chart) way.

Do ensure that you are achieving not just one but many of your ongoing goals, you must build outstanding behaviors and habits. One of the things Henry works with his clients to stay longer term consistent is to use this analogy:

“With each decision you make as it relates to moving toward or moving away from your goals, each good decision is like putting a dollar into a piggy bank while each poor decision is like taking a dollar out of the piggy bank.  Over the course of a week, a month, or a year, you are working to ‘build savings’ in your piggy bank so that when tough life situations arise you have money in the bank to ensure you won’t lose your positive momentum. Might you lose a day or two in terms of short term momentum?  Sure, but that’s not the goal. The goal is to live a life of long-term growth. Saving, just like saving for retirement, is about the slow and steady while knowing when you look back on your journey it’ll feel like the blink of an eye.”

I really encourage you to watch this episode particularly if you are a goal setter who notices that many of your goals don’t seem to come true. Perhaps you’ve set a fantasy vs a goal, or perhaps you set a great goal but failed to build the habits needed in order to achieve it and then the next one and then the next one.  Just remember that it’s not about a failure, it’s about the long-term journey. It’s goals that help you ascend over and over that are the big winners!