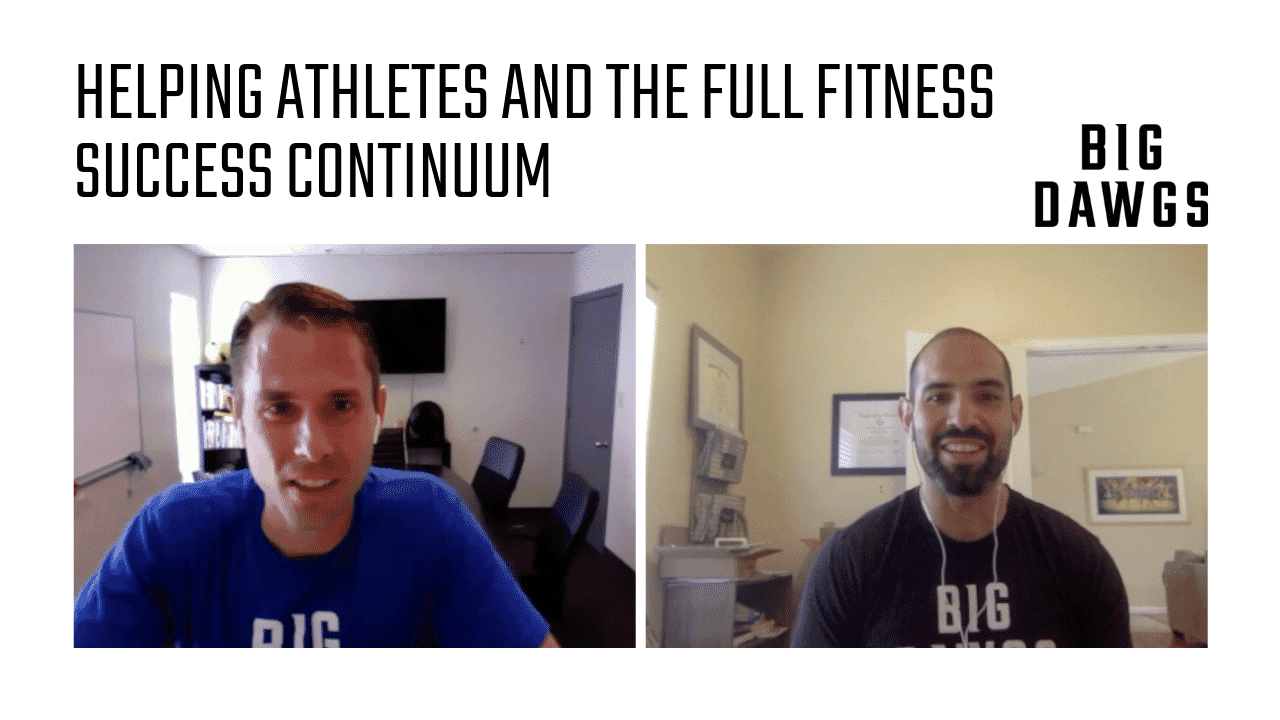 “I meet people where they are so that I can help them see the big picture of how they will progress for many years to come. The rest...well, that’s just work” - Will Trujillo

I had the privilege of sitting with Big Dawgs Coach, Will Trujllo, today. I think we both felt like we could have spoke to one another for about 3 additional hours, but we spoke about some really interesting topics surrounding how he helps his clients and athletes optimize their fitness and how he got to the place where he sits today. Namely we spoke about how his experiences in these 4 areas helped him get to where he is today:

I think you’ll find that as you get to know will, you’ll love his dry humor, his curious and investigative interest in fitness, and his raw “tell you the truth” mentality

Will played football for a tiny school in Colorado. Frankly, his team was terrible - his words, not mine haha. However, something got instilled very early in Will through his high school football years

No matter how bad we were, I always believed 100% that we were going to win every game. I never doubted it.

Will has a certainty about his actions that not many coaches have. He’s willing to put in the grunt work, the research, and the time to improve himself and his team day in and day out. Football helped him define this.

After high school, he went on to play Div. 2 football where he fell in love with training. Will tells a story of how he was one of the few players who agreed to stay over the Summer to get in shape for the upcoming season. He’d wake up, go run, go work a construction job all day, lift at night, and do it all again the next day. Because Div. 2 schools don’t give free room and board during the Summer, Will had to make his own way and work his tail off to give himself a shot...which he did.

It was that time in the gym and on the track that he realized that he had a lifelong passion for doing and understanding fitness. But, perhaps more importantly, he also realized that when he had a great fitness program designed for him, he tangibly improved both on and off of the field. It was through his hard work and proper programming that he went from a nobody on the team to a consistent player his junior year.

Will Trujillo - The CrossFit Athlete

From a timeline standpoint, Will got into CrossFit at the same time that he was going through Physical Therapy (PT) school in Goodyear, Arizona. I’ll take the CrossFit story first because I think it plays better in the article haha.

Will found a gym early in his stay in Arizona that he really resonated with. It was a competitive gym that also took good care of people’s relationships inside of it. Will really learned the people side of fitness through his experience in that community.

It was also in this gym that he had multiple team CrossFit Games Appearances where his knowledge about whas was/is needed to win in the sport blossomed. He saw first hand how the best in the fitness sport business trained, moved, ate, and improved which sparked Will’s curiosity yet again. He couldn’t just be an athlete, he had to investigate it.

After he blew out his elbow around 2014, he had to rehab it, but it helped him ultimately come back even stronger and enjoy individual competitive births at the South Regionals in 2015, 2016, and 2017. Those experiences cemented Will’s understanding for how the sport “works.” He knows what you need to win, and some of it is physical while plenty else is mental. It is that understanding which has helped Will coach countless athletes to make sure they are getting the best from themselves which always begins between the ears

Will Trujillo - The PT

It is unique that somebody with as much sport + CrossFit sport + coaching experience also has a PT stamp behind their name, but if you listen to Will for about 1 minutes, you know this guy needs to investigate the depth that health, fitness, and sport have. He needs to understand how it all fits together, and how to progress anybody forward regardless of where they sit in the first place. Something very unique to Big Dawgs Coaches as a whole is that they truly love learning how fitness intersects with each and every one of their clients. It isn’t something that feels like work to them, it’s something they seek out.

Will elegantly discussed how he sees 2 continuum perspectives in fitness:

There is a big grey area in the middle of those two disciplines which is where a great number of clients and athletes sit. Will’s background in both the S&C and PT buckets has helped him to elegantly bridge the gap between the 2 disciplines to connect 1 full fitness continuum that linearly moves forward as the client does.

Will Trujillo - The Coach

With a background like Will’s, you can see how coaching fitness is just in his blood. I asked him a few questions that I found Will to have really interesting answers to. The first was

“How do you get your athletes to buy into a longer timeline to see success?”

Will’s Answer was so well said:

Will used the example of his athlete, Tommy Vinas. Tommy is only 23 years old (as of 2019), but Will has coached Tommy since Tommy was 17. When Tommy was 17, he weighed around 175-180 pounds. It has taken Tommy 5+ years to put on approximately 25 pounds of lean muscle. Now, I know that sounds like a lot of lean muscle...it is! It took that long even with Tommy eating a lot, training a lot, and recovering.

The reason I thought this was such a great answer that Will gave is because he gave it in a way that his athletes can understand. Most all of his athletes will know that Tommy is a CrossFit Games Athlete - Individual and Team - and they will know that he has a propensity to “get big” because his body is  more built that way now that he’s in his early 20’s. Without that point of context about Tommy, though, Will’s athletes would have a harder time buying into what the realities of “getting good” in the sport really look like.

Will Trujillo - His Current Fascination In Fitness

I asked Will what he was most interested in the fitness world right now, and he immediately responded with “Motor Control.” After I asked him to define it, which he did as “It’s how people are able to move,” I asked him what he was so interested in.  His response was really interesting.

Will is so interested in motor control because he sees many coaches and programs work for people, and he sees those same coaches and same programs not work for many others. What he does see as a constant in the fitness arena, particularly in the fitness athletes, is a growing path to their movement looking really “good.” He used the analogy of how his muscle ups would look next to Rich Fronings; Rich’s are just clean and consistent. Athletes who don’t have that figured out and trained really well will spit off too much energy to progress through rigorous workouts efficiently and effectively.

So, Will is digging down the rabbit hole to better understand where motor control comes from, how you improve it, and how you maintain it whether you are at full energy or fatigued. We’re sure that he will come up with some outstanding thoughts and answers over the years!

Will has a great ability to be the challenger, the investigator, as well as the supporter of his athletes - even if he currently lives in little Grand Junction, Colorado haha!

I truly look forward to discuss a lot more of what’s going on inside of Will’s head in future interviews!