Whitney Reese is not only a CrossFit Games competitor, a dual board credentialed Doctor of Physical Therapy - with more additional credentials than I can even list - an Olympic Development team soccer player, and somebody who has endured 4 different surgeries, she is an extremely supportive and mindful coach for Big Dawgs who is using her decades of experience to help her clients and athletes align their biggest priorities to how they are experiencing their training and competing every day.

How Does Whitney Help Her Clients And Athletes Succeed?

Whitney immediately begins to develop her clients understanding that she will help give them a strong support system with which to build their health and fitness on top of. She spoke about the athlete having a tangible lifecycle from beginning to end, and each unique athlete needs to have a different support structure depending on who they are and where they are in that lifecycle.

I’m not a cheerleader. I get to know how people are hard wired so that I know if my athlete needs honest feedback in the moment or an atta boy. I love figuring out what each of my clients needs and then build it into their plan.

Whitney takes her athlete’s seasons into play when she is designing their programs, but she also takes their seasons into play when she’s helping them understand specific intent to approach and digest each of their workouts. For some parts of the competitive season, Whitney wants to make sure that her athlete’s intent isn’t to feel like they should “nail” a specific workout whereas at other times of the year, namely around competition time, Whitney wants her athletes to feel snappy, and then right when they finish their workout they’re out of there for the day. But, just like everything else, Whitney takes into account who her athlete is, what they need, and where they are in their season and athlete lifecycle before she makes the comment at all.

Whitney uses this to help her understand if her athletes are in balance. If they score in certain ranges, she may actually find that they are more likely to crash. Whitney then asks her athletes if they want to discuss it further. If they do, wonderful, they do. If they don’t, it’s simply data. Funny enough, Whitney often sees people over 35 years old as more interested in discussing these questions more. She’s not exactly sure why, but she generally sees people over 35 wanting to leave a legacy and wanting to have more longevity.

Whitney and I had a great moment in the interview where she said she was a “multiple sport athlete” and then she listed about 7 of them as sports she was playing hahaha. At 15 years old, she was on the region Olympic Development composite soccer team  when she blew out her knee for the first time.

It was that moment where she recognized that she needed to think about what her life would look like if she didn’t make it to the professional level as an athlete. Whitney credits her mom for helping Whitney see that learning and academics were a brilliant part of how she could go forward, sports or not.

As Whitney came out of her knee surgery, she had to choose 3 sports only, but within those 3 sports she could only play the season and then she had to move onto the other sport. That was so different for her. She again credits her parents for helping her get through that time and ultimately supporting her when she chose soccer to pursue as her main sport. She went to college, and then she ultimately chose to pursue her doctorate  at a Colorado school because the school was 20 minutes away from a women’s semi-pro soccer team and because she loved their soccer field (facility). Sport is something that always has and always will inspire Whitney Reese!

As Whitney was choosing soccer as her sport of choice, she was also earning college credits by the dozen while she was still in high school. By the time she graduated from high school, she was already a second semester college sophomore. You can see where we’re heading here...she is a voracious and lifelong learner.

That thinking is what I found so appealing about our conversation. Whitney spends time thinking about why she does things (certainly today she has more perspective than she did when she was  18), and she appreciates her opportunities in life.

After she graduated PT school, one of her highly esteemed professors had a colleague opening a practice in Whitney’s hometown in Texas, so Whitney followed suit and did a full Orthopedic Residency and Fellowship. Whitney’s goal was to “Learn what you know” from her professor/now boss, so she did any work possible to learn and grow within the field. Sidenote, when she graduated her residency was the same year she qualified for the CrossFit Games - success :-)

Whitney ended up having 2 more surgeries between high school and her residency where her last surgery came from a co-ed adult soccer game where a 250 pound male tackled her right into a 13 hour ER trip.

As Whitney was coming back from being injured, Whitney’s sister mentioned to Whitney that the studio next to her (sister’s) Pilates studio was a strength and conditioning gym that began to offer CrossFit. Whitney trained for a year, but she was also training to become a high level Fifa soccer referee, so she opted not to go to the initial CrossFit Games so that she could focus on the ref’s course. Needless to say, when Whitney’s friend did go to the Games, Whitney’s competitive spirit erupted when her friend came back home. For the next year, Whitney did the men’s weights for every workout and learned how to win in this thing called CrossFit.

She went on to qualify for Regionals in 2011, 2012, 2013 (team), and 2014 + she went to the American Open and Nationals (weightlifting) where she set a Texas state record in the snatch, clean and jerk, and total; this was all while coaching, running a full PT practice + leading a residency and orthopedic system. Whitney’s statement to me as she described doing all of that?

Whitney took a long time to really see what her non-negotiables really are. For Whitney to compete at a high level in CrossFit, she had to cut her real priorities which resulted in her losing sleep and surviving training vs thriving in it. She realized that nobody in her life needed her to win in CrossFit to enjoy the life they had with her. To this day, Whitney takes great pride in the support she helps her clients and athletes with as they find the space to learn where they really want to spend their precious time. For Whitney, it took a brutal 2012 Regional final workout where she coughed up blood prior to and during the final workout of the weekend (while still winning her heat) to begin to build her initial awareness of the conflict that she was in with her own priorities.

Her priorities are education, health and family. If she doesn’t take consistent action at making those things her priorities, she feels like she’s being ripped in half. She had to learn that competing in CrossFit at the highest level would require her to remove her real priorities. Because she was unwilling to remove her priorities, she reduced sleep which is what lead her down the burned out spectrum. After coughing up blood, she needed 6 months to fully recover; that’s when she decided to go team in 2013. It was after 2013 that she knew that she was still not fully recovered, but because she was reaching the end of her career she decided to go for 1 more year which was her last Regionals in 2014.

It was through her awareness around nobody else caring if she competed or not allowed her to decide to opt out of the Open, and she’s finding that she is so much more aligned, having so much more fun, and is now able to sleep 9 hours every day - note that she still squats as much today as she did at her peak!

Whitney - Summing Up With A Cliffhanger

Self described as her nerd out moment, Whitney is most interested in exploring the implications of pain science on workout/exercise prescription. Unfortunately, we ran out of time so we’ll have to write another blog at another time about that!  What a rabbit hole that will be

Whitney is somebody who is so clear on why she does what she does and how she helps her clients and athletes do the same. What a pleasure it was to enjoy 30 minutes on a call with her! 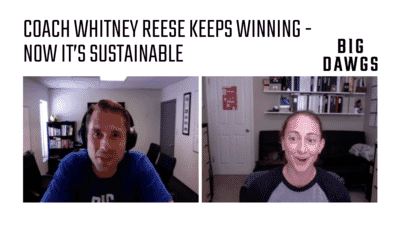