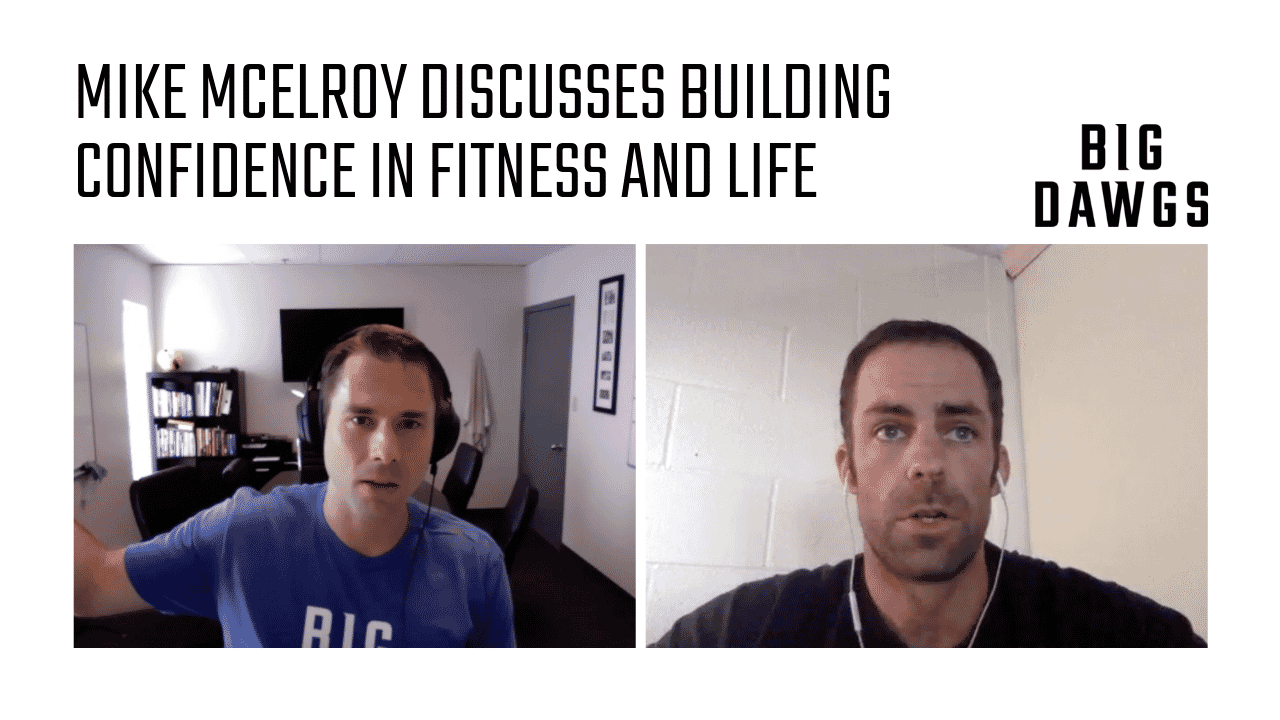 Firstly, you may see people call him Michael, but since he was 23 years old, Mike McElroy has been sporting the leaner version of his name.

I had a great time chatting with Mike. He has a great athletic past and present; he played golf at a high level as a kid and teenager, as he “grew up” he got into CrossFit where he became a perennial CrossFit Regionals competitor, and now he’s dipping his toe (if we can really call it that) into the half Ironman Triathlon racing world (1.2 mile swim, 56 mile bike, 13.1 mile run). Through all of those experiences, what you’ll hear from Mike throughout our conversation is his deep connection with family, friends and clients. Mike takes tremendous lessons from his past and present and then pays those lessons forward to those people around him. It was incredibly refreshing to listen to!

I opened the conversation with Mike by asking him how he uniquely helps his clients. Mike immediately responded back with a focused look on his face that he helps his clients build strong and lasting confidence in themselves.

Mike’s dad was where Mike’s desire to help build confidence in people came. As Mike was progressing as a golfer early on, he and his dad would discuss how Mike could build real belief in himself so that when he was on the golf course, he wouldn’t need anybody else around him to support him. That helped Mike outperform many golfers who were naturally more talented or better athletes, and it’s stuck with Mike ever since. Mike actually began coaching because of wanting to help people build their own confidence

You have to have confidence in yourself. You can’t be overly cocky or arrogant, but you have to know and believe that you belong there and should win.

What Do You See In Your Clients That May Be Them Lacking Confidence?

Mike discussed that generally the biggest thing he sees in his athletes who lack confidence is when they overly compare themselves to other athletes. Mike thinks that having reality around where you sit is very important, but you can’t always stack yourself up for every workout every day.

The next thing that Mike notices when his athletes are lacking in confidence is when they ask him “Do you think I can do it in ‘x,’ or ‘y’ time?  Do you think I can do it unbroken.” Mike wants to help that client in that situation to attack the workout as an athlete and be less specifically worried about what Mike thinks. It all comes back to self-belief and how important that is to an athlete’s progression.

How Do You Find The Sweet Spot Between Confidence and Cockiness As Well As Comparison vs. Inner Belief

Mike noted that virtually all great athletes have a deep inner belief which can sometimes border on seeming cocky, but Mike then said that he doesn’t see too many athletes project that to him or to the public anymore.

When Mike sees an athlete he is clearly on the under-confident side of the coin, he actually does push them to work more toward a cocky feeling by pumping them up and telling them “you should be here, you should beat this field” etc...He wants them to move more toward the middle, and he knows how important a strong, but realistic, amount of confidence/cockiness is.

When Mike sees an athlete who is too cocky, he brings the truth into the conversation. If his athlete is doing a workout or a competition that includes muscle ups and his athlete has 10 fewer unbroken muscle ups than the rest of the field, he needs to bring them back down to Earth if they are cockily overshooting what they are actually capable of. He doesn’t want to make them unconfident or depressed, but he does need them to know the truth because it will allow them to execute the best strategy they can.

Mike and I then discussed how social media may be playing a role in athlete’s confidence and or cockiness. He spoke about how he sees people put the butterflies and rainbows all over social media and are “hooked” to the social media platforms often having more inner-belief issues than those who don’t spend so much time on them. Sidenote - we did agree that many athletes need to use social media for sponsorship purposes, so it’s not always as simple as just being “out of the social game.”

How Did You Go From Golf To CrossFit Athlete To Ironman Athlete And What Did You Learn?

I did chest and tri’s 3 days per week in high school even as I played golf. It didn’t help me get better at golf, but that’s what I did haha

Why I wanted to include this section in this article was because Mike elegantly talked about how he understands pain. In golf, Mike recognized that much of the “pain” on the course came between his ears - in the mind. He had to learn to tame and fire up his mind because it was his mind that made the difference within a tournament.

Mike then got into CrossFit because he wanted to be really good at everything fitness related. Within that pursuit, Mike learned how to deal with the pain inside of CrossFit workouts and competitions. He spent a lot of years learning and experiencing how to go in and out of that pain.

Now that Mike  is competing in IronMan Triathlons - his first that he’s trained 6 months for is in October of 2019 - Mike is learning what the pain feels like during those races. Every day he learns and grows and builds experiences understanding this pain which makes him better on the race course as well as in the gym, coaching, and at home.

I thought that was such an interesting line of thought from Mike because all people, athletes specifically, love to place themselves into pursuits that challenge them. That challenge, or pain, is very often what separates the winners from the losers (in terms of their placement in a race or competition). Mike has built a life where he pursues confidence through challenge, and that pursuit has lead him to some amazing fitness and life experiences that make him the great coach he is today

Know Your Intent - It Informs Your Pain Expectation

From the conversation where Mike discussed his own pain in sport, we shifted into how Mike helps his clients understand and deal with that pain that they will face. Mike’s answer was so good. Mike said

I need to ask my clients “why are you doing this in the first place?” Depending on why they are doing it will inform me, and more importantly them, how much pain they should put themselves through at all.

If Mike has a client who says to him “I want to win in the sport of CrossFit” Mike knows that she/he will need to go through a substantial amount of workout pain in order to be prepared to win at a high level. That’s what is required to beat the rest of the world.

However, if Mike had that same client tell him “I want to do CrossFit to improve, learn new movements, and enjoy a competition once or twice per year” Mike may ask them next “Do you want to place well; does that even matter to you?” If the client doesn’t really value where they place, they just want to improve for themselves and enjoy a few competitions per year with her/his friends, Mike will very likely set a very different pain expectation. There is no need to go through a lot of pain to achieve those results and have that much fun.

Often, we fall into the world that we need to go “all out” in everything that we do. We’re achievers. But achieving long-term wins doesn’t necessarily mean we have to put ourselves through more pain. It was very well said!

What Is Mike Interested In In the Sport Of Fitness Right Now?

Mike is very curious about if CrossFit can turn more into a sport because of the Sanctional events now being more important to an athlete’s entire season (if people win a Sanctional or place highly enough, they may punch a ticket to the CrossFit Games). It may help CrossFit become a more legitimate sport, and it may help most athletes be more realistic about the level where they are.

What Is Mike Interested In In the Fitness Right Now?

This was a cool answer from Mike. Mike is really interested in what “the thing” is that helps people be consistent for 5 or 10 years. So many people ask the question “How do I get my motivation back.” Mike is really curious to help those people find purpose in the long-game of fitness and health. Seeing how deeply Mike wants to help clients and athletes and how well he connects to them, I think he’ll zone more and more into it as he goes!