“Humans are humans. We are ever evolving creatures who change based on our unique environments.”  - Michael Bann

I’ve been really excited to sit down with Big Dawgs Coach, Michael Bann. He and I have known each other for 5 years, and we’ve gone down the rabbit hole in a plethora of different topics surrounding health, fitness, and fitness business. I can safely say that Michael’s mind simply works differently than others when it comes time to learn, digest, remember, and implement health and fitness knowledge.

I opened the conversation by asking Michael how he helps his clients. Short and sweet, Michael answered by saying humans are ever changing creatures who change based on their unique environments. Michael works very hard to assess that with his clients beginning day 1 with a comprehensive intake form to help him begin to connect the dots of where he can help them unlock additional potential whether they are beginning at step 0 or step 9.9 (out of 10 haha).

Listening to Michael, he sees everybody he works with very uniquely. There is no such thing as a template in his mind; he actually can’t even “see” a template in relation to his clients because each of his clients presents so uniquely in Michael’s eyes. It’s through each of his client’s specific perceptions of their own fitness that they actually change their own physiology around a workout or their training program. What Michael means by that is

His clients’ minds - in fact all human minds - choose to perceive their environment in very different ways which leads their minds to change their physiology for the better or worse.

Michael always begins his assessment of his clients with the basics. That looks like:

From there he digs into their physiology from what he finds in his client’s intake form, and from their he determines where he’ll dig further down the rabbit hole with people. That digging deeper may be additional testing, but it all must lead back to the basics which comes in the form of better fitness movement - ie fitness improvements.  At that point, he’ll begin to learn where his clients may sit in the psychosomatic side (we’ll discuss later, but Michael would always refer out to deeply qualified professionals should somebody need extensive work outside of Michael’s scope of practice.)

What I found so interesting was that Michael referred to both a top down and a bottom up approach:

Michaels example of a top down approach would be when somebody has something very stressful, say a deployment, that they are dealing with; Michael would look at understanding their mindset around that deployment prior to digging into the physical side of the equation.

Conversely, a bottom up approach may exist if somebody was in another country and they got a bug or parasite in their gut from food or water. At that point, Michael would need to take a tangible approach to effectively help his client move forward bottom up.

In both the top down and bottom up approaches, Michael is looking to identify how his clients perceive their situation because that leads the rest of the physical body to react - or not.

Most of the time Michael will take a bottom up approach because his clients don’t usually come to him wanting to talk about those stresses, but over time as Michael builds trust with the client they often begin to want to discuss them which allows Michael another helpful lens into how to support them. As people begin to ask questions, Michael supports them very often with books and questions. He knows that if people find the answers on their own - even with a book or a question nudging them - they are far more likely to feel inspired and take ongoing actions than if Michael dictates the answers to them.

I am more of a consultant or a mentor or a guide. I want to help people so much that they ultimately don’t need me anymore.

I asked Michael what lead him to be so fascinated by this world of health, wellness, fitness, and the body/mind connection, and this is where he went into his love of learning about people’s resiliency. Currently (he made it clear it’s his right to change this as he learns and grows haha), Michael’s definition of resiliency is:

Michael’s definition of resiliency is “a person’s ability to do whatever the hell you want while minimizing the adverse consequences of it.”

People constantly want to do things or achieve outcomes that naturally have adverse outcomes. Michael wants to help people achieve those things while minimizing the adverse outcomes that may arise from their choices. For example, if somebody wants to be a Green Beret - special forces - they will inevitably be exposed to aircraft fuels, lead, violence etc. Michael wants to help his clients recognize those adverse consequences so that they can work together to minimize them while always maximizing their potential in that role.

Michael had a fascination with pain particularly with his deep martial arts background. He’s been learning about pain for decades. He used the example of somebody stubbing their toe:

Somebody just won $500 million dollars and they are walking up the steps to claim their check. If they stub their toe in that moment, they will experience pain in one way

Somebody just lost their job. If they stub their toe, they will experience pain in a very different way

Michael has spent countless hours studying and learning how the mind perceives these situations entirely differently based on that person’s perception of the situation they are in. In reality, people can change the way they experience pain based on how they choose to experience it. If they accept the fact that they are in pain, they are quite capable of reducing (likely not removing haha) the depth of pain they feel in that moment

Michael went on to explain how one of his Seal Team 6 clients told him that the only real difference between him and his team and those who couldn’t make it to that high level - Tier 1 as Michael described it - was their mindset. When Michael asked him if that could be taught, his client said that it could not. It is hard wired in some and not in others. I naturally went back to the beginning of the conversation with Michael and asked him “How does he take somebody’s hard wired mind and environmental adaptations over their lifetime and help them move forward (it should be noted that I asked this question poorly haha).

Michael answered this question brilliantly by saying “I help them with the physical side of the equation. I have friends who I can send those people to have high level discussions with. Those friends are the best experts in their unique fields, so they can help that person understand where they sit within that specific discipline.” For Ex, Michael has friends who he can send candidates becoming Navy Seals to discuss the specific things they will go through while attending BUDS training/selection.

Michael is humble enough to know that he isn’t the expert in the field of “winning at becoming a Navy Seal” but he is absolutely the expert in physical training and resiliency maximization.

As Michael and I began to wrap up our conversation, it became so clear to me just how personalized he sees his clients experiences being historically as well as how personalized their programs need to be into the future.

I went on to ask Michael what he was most fascinated with right now when it came to fitness, health, and wellness. He went right back to resilience. Michael discussed how he sees a lot of commonality between somebody who is able to get out of chronic pain as well as people who are trying to compete at a high level in fitness. That will be fascinating to see Michael play out!

I will leave you with this - Michael is outstanding at using metaphors to help me and his clients understand what could be considered very complex topics. It is a lesson I will be taking with me as I go forward! 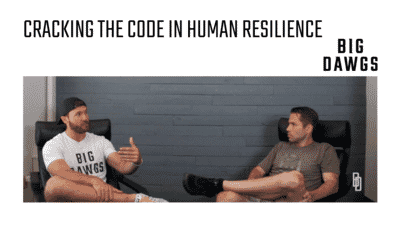