Whitney Reese sat down with me today to break down movement. Movement is near and dear to all fitness athletes because they want to move faster, for longer, with less chance of risk - injury.  Movement is also becoming increasingly more relevant to all of fitness because people are worried about getting hurt.

Because Whitney is such a noted expert in movement, I had to pick her brain, so I asked her a few pointed questions:

What Is Good Movement? A Definition

Whitney had this answer in the bag, most likely because she’s answered this question 10,000 times!  Whitney answered the question about what good movement is in the most simple way I have ever heard. She said good movement depends on:

All 3 perspectives  must be taken into account because they all influence one another in some way. People must assign meaning to movement because it inspires people to want to do it. The task is the movement itself and can be broken down into the parts or the learning of the movement. The environment must be conducive for movement to be good or to be improved - think about being dead tired and trying to move well; that environment is much harder to do movement well in.

Good movement depends on 3 things: the environment, the individual, and the task

Whitney said emphatically that people who move well often have experienced movement in a playful environment where they can do movement, let their senses receive inputs or feedback, and learn how to do that movement better naturally. Sure, they practice the nitty gritty, but they don’t miss out on “playing with” the movement. It allows them to change environments and still perform at a high level.

This playful approach is akin to world-class musicians. Musicians may practice scales, but they also play with the notes. They learn to adapt and improve and enjoy the motor skill of playing music which benefits their longer-term ability to perform.

For anybody to learn and repeat what they have learned, they have to have gone through a sensory input based “loop” of feedback where they can perceive and then adapt to that input:

In the world of therapy (physical), that  sensory input is injury and pain.

In the world of sport and learning in fitness, that can be a learning style which could potentially be from a video. However, that video is only beneficial for the person who has never seen that video before and needs a reference about what the movement looks like. For people who have seen the video before, their inputs would be a verbal explanation of the points of performance followed by a discussion about how they did. This process would be broken down by a coach asking a client to do these things:

It is through that process that a person actually learns and can improve because it gives proper inputs right back to them.

I had to ask Whitney for an example at this point

For somebody who wants to move faster or more efficiently how do you help them identify if they are moving efficiently?

Initially, Whitney looks at the entire movement they are trying to do. She asks herself:

Whitney then discussed how important it is to remember that there are times for cues - coaching feedback - during the movement and times where it has no benefit. A snatch, for ex, is so fast that no cue during that movement could possibly help somebody. However, a cue during a back squat, because the speed is much slower than the snatch, can be beneficial.

It was clear to me that Whitney cares greatly about the outcomes of the movement, not just saying a cue to say a cue (ever seen coaches that do that!  Me too - ok, maybe I’ve done it once or twice haha). Whitney gives cues that discuss outcomes, not just what the movement should look like.

It was at this moment that Whitney “dropped the mic” and blew up the fitness internet! For the person who already knows what the movement looks like in an open-loop movement (think Snatch), showing them a video of the movement actually makes them worse.

For the person who already knows what the movement looks like in an open-loop movement (think Snatch), showing them a video of the movement actually makes them worse

Think about that for a second. How many times have you been sent a video to do something, snatching, throwing a baseball, kicking a soccer ball, whatever, that hasn’t been helping you!

For somebody who wants to move faster or more efficiently how do you help them improve and speed up their improvement?

Whitney, again, broke this question down into simple responses for even a guy like me to understand!  Whintey answered this question by saying that People need to know how they learn best - there are 3 types of learners in this context

Visual learners have to define success and define what they’re going to do in order to achieve success. It isn’t a video with some fancy lines or angles on it. It’s doing a movement 10 times (on video), going back and looking what they did well/poorly, and then designing their strategy to improve

Verbal learners don’t often go back and look at the video because they aren’t visual.

Kinesthetic learnings don’t often need to look at a video because they already know how they felt about the movement.

From there, Whitney helps the client see that they need to make goals that are task based. Either you achieve the task or you didn’t. For ex, if she was working with a client who wanted to improve walking, she wouldn’t cue stride length or knee angle, she would cue “Ok, you did the last rep in 15 seconds, what could you do in order to do it in 14 seconds, well, the next time?” Cueing task outcomes has been shown to be far more beneficial than simply cueing movement “fixes.”

Wow, what a great conversation this was. Thanks to Whitney for educating me and us as always. Until next time folks! 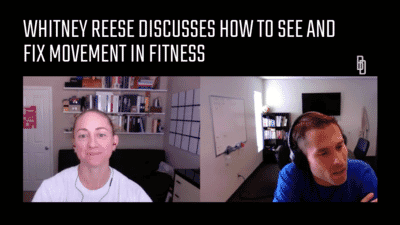