As I often like to do, I asked Michael Bann for a definition, this time it was a definition of what the aerobic system is.

In this video, Michael Bann dives into the aerobic system and intricacies within human body.

As you’ve likely heard, just as there is an aerobic system, there is also an anaerobic system which really just means “without oxygen.” I asked Michael what makes something aerobic as compared to anaerobic.

Michael surprised me a little bit with his initial answer. He said that aerobic training has a large component of mental and emotional intent to it. If your intent on a 2k row is “go all out and ‘die,’ that will put somebody into an anaerobic state because it’s not sustainable. However, if you go into a workout with the intent of sustainability and consistency - Michael mentioned a historic Rich Froning interval workout where he rowed 4 1k rows at 3:25 with 60 sec breaks in between - that much more likely allows you to complete the workout at a pace that you can do over and over which yields an aerobic outcome.

Michael went on to make an astute point that templated workouts or blogs simply can’t reconcile how people are doing the workout. They don’t “know” what people’s intent, pace, or outcomes are (generally speaking), so it’s very challenging for the athlete to get the proper dose response. And, it’s also very challenging for the blog to “tell” a thousand people what their intent should be per what they need.

Mental intent drives just as much as physical exertion. The nervous system is still king

The purpose of the aerobic system is to allow the muscles to contract over and over and over by using oxygen, as opposed to sugars.

“It just means they suck at using oxygen, or they have poor muscle endurance.”

That means that they simply cannot go long and sustainable as compared to general benchmarks and scores that Michael - and other Big Dawgs Coaches - see every day. For ex, a common test we look at is a 60 min row. How far can somebody row, how sustainable is it, what breaks down if something does?

More specifically, Michael looks at these pieces to understand the aerobic system better:

You can have a great VO2 and a great heart (bigger left ventricle to pump blood through), but if you can’t deliver oxygen to the muscle, you’ll go anaerobic.

You must find the key area where you’re just underneath your anaerobic threshold. In cyclical activities, think biking, running, or rowing by themselves, there has been a lot of research into these thresholds, but in something like CrossFit, it really is chaos depending on the person, the movement, the combination of movements, etc….that means it’s virtually impossible to fully test fitness in a lab.

Michael isn’t sure here even though he would hypothesize that they would. He sees people who are super aerobic mixed with guys who are not aerobic who mesh well together. Michael does like to look at lung size vs lean body mass as one measure, but it’s merely one data point for Michael to continue to learn from.

Do people with “worse” internal stats, do they have to suffer more, or do they simply figure out how to do a workout differently?

Michael believes there is likely a genetic component to this where people can “make up” for certain heart/lung/fiber/mitochondria deficiencies with the “right” genetics. There are also psychological components that would make people good at something like CrossFit. Some people who came from tougher backgrounds or learned to struggle in sports (or elsewhere) can mentally “go there” better than people who are “softer.”  That goes back to the resiliency conversation as well.

Another big component is how effectively people breathe. Even if people have smaller lungs, they can breathe more effectively (faster breath rates for people with smaller lungs) and sustain for longer at lower efforts which would help them remain aerobic.

Do people who are less aerobic, what challenges will they face?

Michael had a really interesting answer here. He said that most power athletes do generally like to do short/fast/explosive lifts or workouts more than something like a 60-min row, but if somebody wants to do an Ironman Triathlon they have to do the work and build the system.

Michael mentioned one of his high level CrossFit athletes getting up to 25 500m rows at 1:33/500m pace, and he did all of those rows within 1 second of each other fully aerobic and sustainable. It just takes that much work for powerful athletes to learn how to become more aerobic.

What are other considerations you must think about when building the aerobic system?

Again, something very interesting from Michael on this. Michael mentioned that you have to think about where the heart is going. Literally, where is the heart travelling in space as you do a workout. For ex:

This is so relevant because as the heart changes planes, it changes how it pumps blood to the muscles. With eccentrics, it changes the venus return back into the heart making it harder to stay aerobic. If you displace the heart (burpees), you gravity doesn’t really fight against you, and If you are inverted, gravity actually pushes blood into your heart.

Another important thing to think about is the lungs. Are you able to breathe well. If you have a heavy D-ball on your chest/stomach, it’s much harder to breathe normally. Also, if you have tight ribs (mobility issues), it’s harder for your lungs to reach full breaths which challenges the aerobic system even more. 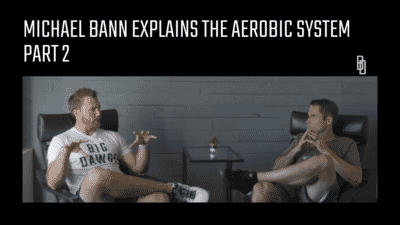